55 Astonishing Blonde Beard Styles – No Reasons to Be Shy

There is a popular myth that blonde men shouldn’t grow beards because apparently a blonde beard doesn’t have the same attractiveness or appeal as one a little darker.

This is clearly false, however, as the following fifty-five photos will prove. A blonde beard can be as sexy and attractive as any other if trimmed and groomed in the right way.

More red than blonde, the beard in this photo is a perfect example of a wild, ungroomed style actually looking amazing. Perfectly shaped and not too long, it is complemented perfectly by the unconventional black earring and woollen vest.

Blue eyes, a perfect comb-over, and a trimmed beard. “Perfect” I hear you say? A beard doesn’t have to be excessively styled or groomed to look amazing. When worn the right way, a simple few week growth can be just perfect.

A shirtless man with flawless bronzed skin, a straw sunhat, and black sunnies. The only thing that could make that more attractive would be a great beard, and here it is!

Thick and luscious, this manly growth is something that mere mortals can only dream of.

Now here we have a beard (and hairstyle) with a difference! Whether dyed or naturally blonde, this facial hair expresses it all.

Styled short on the sides, longer with an orange tinge under the chin, and curled into a great moustache, it takes nothing away from his interesting hairstyle.

Looking at this picture, we can almost imagine the perfect countryman. The short, carefully shaped beard seems to be made for a man with a leather jacket and cowboy hat.

So we have established that blonde beards can look good, but a blonde afro beard? Incredibly, this guy somehow manages to pull it off, balancing it with pale designer glasses, a unique nose ring, and darker clothing to create a look which is one of a kind. 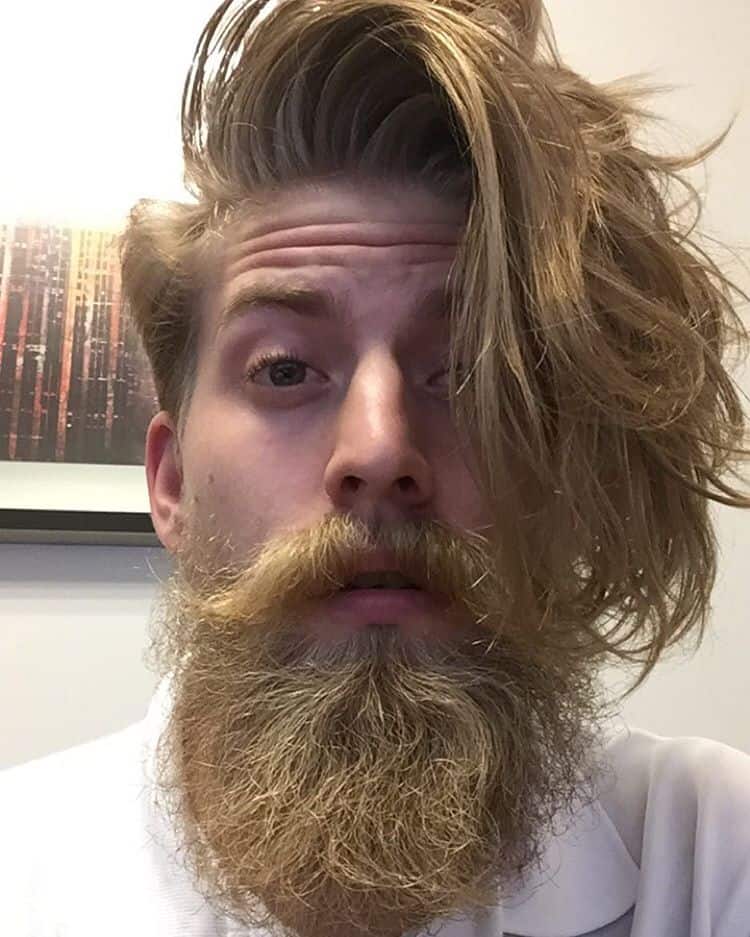 Hair? Beard? Moustache? This photo has it all! A beard that other men would die for, a moustache so thick that you wonder how he can eat, and a hairstyle that is out of this world.

If there is a way to make thinning hair look good, then this guy has found it. A short trim beard with just the right mix of dark and light hair combined with perfectly tanned skin leaves little to be desired.

Is he a shipwreck survivor picked up from some remote pacific island? If not for the designer sunglasses and necklace, you could be excused for thinking exactly this.

Sporting one of the wildest beards possible right next to a well-kept hairdo, he looks as if he could have come straight off a movie set.

Now this is almost the definition of unique style. With face tattoos, nose piercings, suspenders, and a beard which leaves little to be desired, perhaps his most impressive features are his moustache and stretcher earrings. 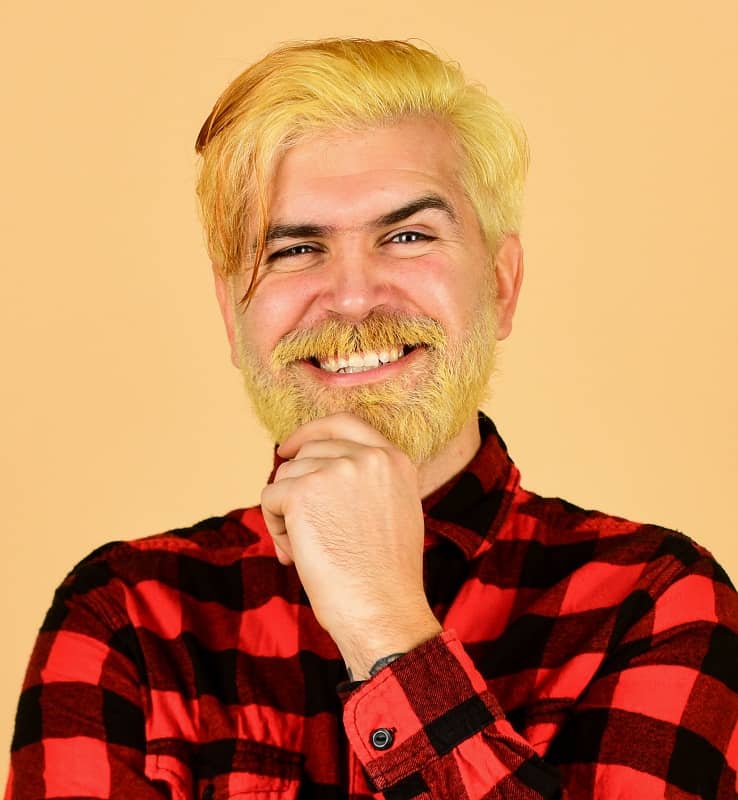 This style is too blonde to be natural. A unique and stand out bleached yellow look, the color is this beard’s focal point. Outside of that, it’s a basic and trim full beard that provides a manly look. 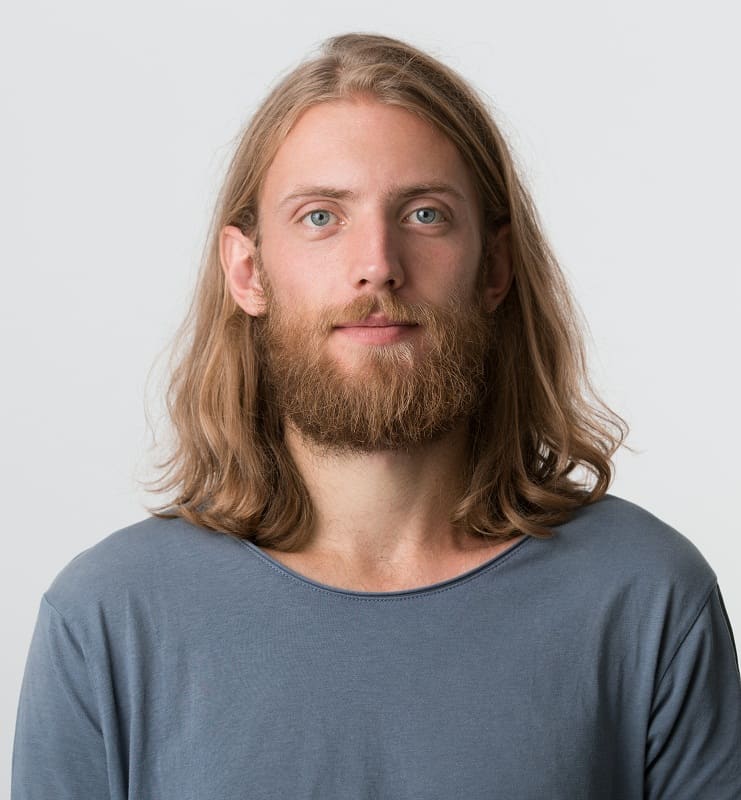 This full beard is long but tame, with straight hairs all the same length rounded off neatly under the chin. The mustache is shorter, gently covering the top lip with a slight middle parting. 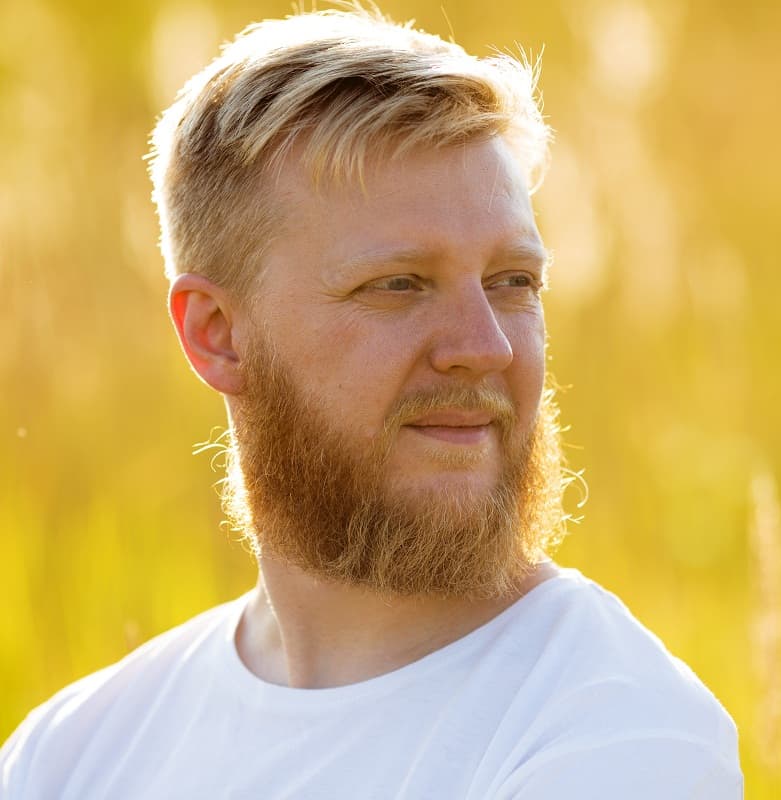 In this look, you can see the beard is a little wild on the sides but fluffy in front. It’s also tapered, growing shorter at the jaw. With a mustache kept cut above the top lip, it provides a clean look. 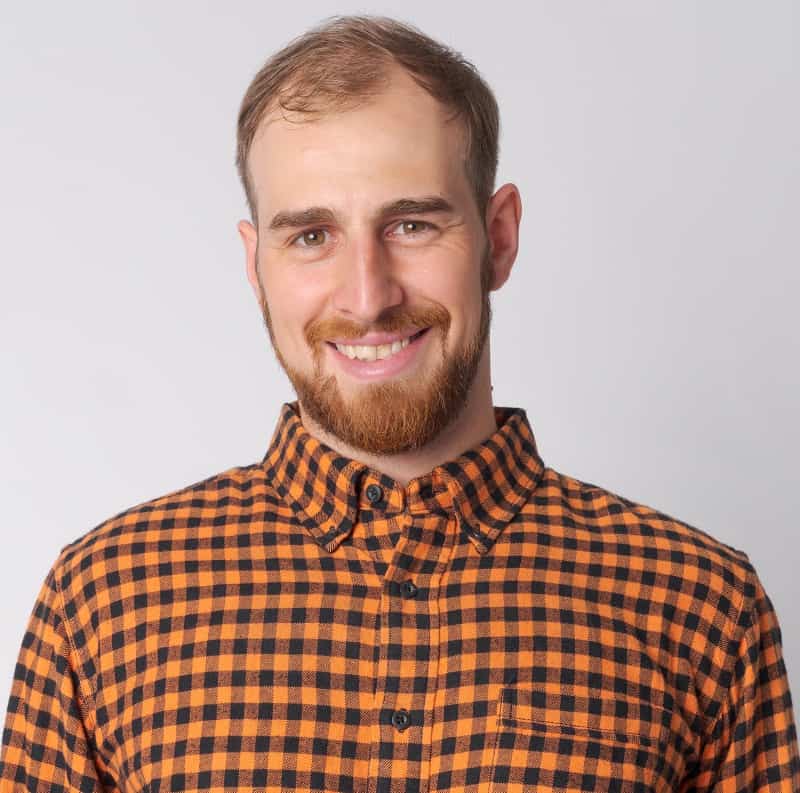 This deep, bronze-blonde beard stays mostly around the chin, with some thick, soft hair covering the jawline too. Connected thinly to a well-kept mustache, it’s a simple, clean look for the average guy. 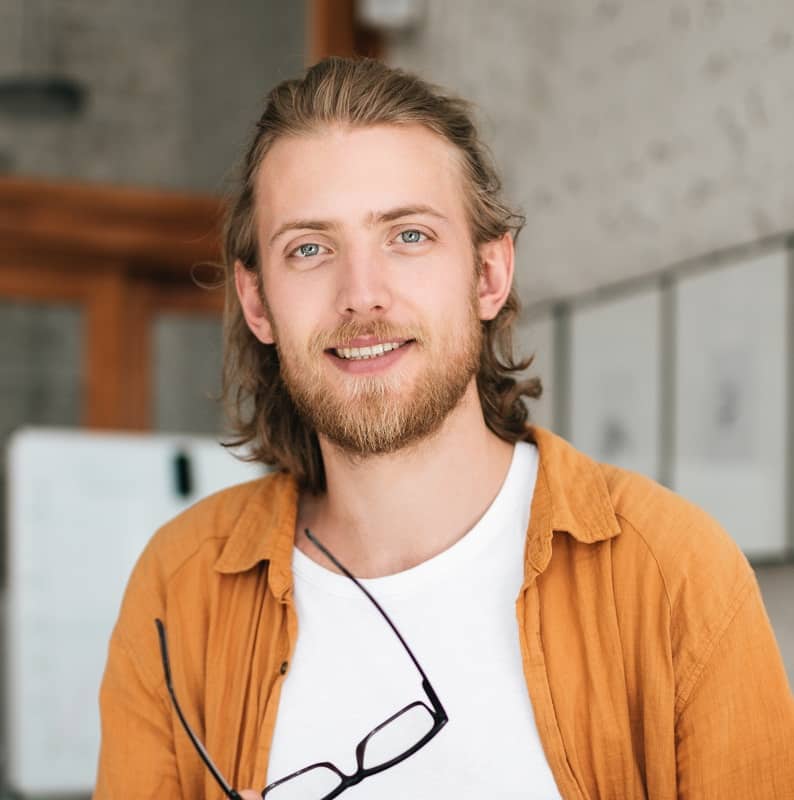 For guys who prefer to keep their cheeks bare, this beard is focused around the jaw and chin. It’s short and trim and topped off with a light mustache that barely connects to the beard. A fantastic, relaxed look.

This is another dye job, but in a more natural shade for guys who want to rock the blonde look. The beard is scruffy and stubbly, but thick. It’s focused around the chin with a thin mustache and line on the jaw. The dark eyebrows add dimension.

This look is for guys who want to let their beard and mustache flow free. The mustache frames the mouth and is parted, so it cascades with the beard. The beard is clearly brushed, but still scraggly.

Going bald? No problem. Shave your head and grow a beard. Thick and groomed, this facial fuzz is styled tame and set straight. It’s a thick, luscious eye-grabber.

For the macho man who wants to show off his thick facial hair, grow it long and proud. Condition it well, blow-dry it straight and let it frame your face. The thick, short mustache blends in.

Darker on the sides but pure blonde in the middle, this beard stands out. It’s cut in a slight curve under the cheekbone, providing a clean appearance.

So you don’t know what to do with your facial hair? Well, don’t copy this guy’s style. With naturally black facial hair covering most of his face at little more than a stubble, he has jumped out of his comfort zone with a wild ginger chin piece.

White sand, blue water, and a man with a beard. Combine this with tattoos, piercings, and some manly chest hair, and here we have a photo to die for.

Bronzed skin, a wild man bun, but a perfectly trimmed beard! Don’t let anyone ever tell you that you shouldn’t have a beard, because this guy has just proved them wrong.

Is it blonde or is it white? Maybe we will never know. There is one thing we do know, though. This old guy has some serious style. Red sunnies, multiple piercings, and a low-cut surf t-shirt give him the looks of a teenager.

This has got to be the perfect incarnation of the blonde beard. While long and luscious, it still manages to appear styled. Combine this with a great hairdo, and all of a sudden we see that this young man has mastered the art of facial hair.

A musician with a beard? Who would have guessed! This young music lover seems to have taken the perfect beard and stuck it on his face, complete with moustache and all.

An African American with full face tattoos and a blonde beard, and yet somehow this guy manages to look more like a model than a hardened criminal. Add piercings and a leather jacket and it seems like we’re looking at one of the cool kids in town.

Sometimes the best blonde beards are the ones which appear to be multi-coloured. Take the beard in this photo as an example. Some dark hairs, some white hairs; put them together and out comes the perfect salt and pepper beard.

Unfortunately, this young man probably isn’t ready to grow a full beard just yet. But he is on the right way. However, the facial hair he does have matches perfectly with his darker eyebrows and fuller hairstyle.

If eyes could kill, we would all be dead. Tanned skin, bright blue eyes, and a beard from the gods combine to make this gent one of the best-looking blokes in town.

While not super blonde, this strawberry-colored beard has been cut and trimmed with perfect precision. Combine it with a darker skin tone, a colourful t-shirt and hat, and a backpack, and you have what appears to be one of the sexiest travellers alive.

More ginger than blonde, his beard matches his shirt absolutely perfectly. Short enough to hide the fact that it is still a little thin and patchy, but still long enough to be a real beard, this guy has mastered the simple art of looking good!

A bald head and a small beard? This image combines the two in a perfect fashion! The beard is perfectly trimmed and makes the man look suave but stylish.

And here we have it, a bikie with a blond beard. Ignoring the tough guy tattoos, muscles, and Harley-Davidson singlet, we see a beard that any hipster would be proud of.

A man and his best friend, what better way to finish. And to make it even better, the man is sporting more hair than his canine pal with a lovely beard moustache combo.

Who ever said that blond beards can’t be sexy? In fact, this intense session of beard overload has left me wondering if blond men don’t actually have the best beards of them all.

If you combine a little know-how and patience with the right style and grooming, every beard has the potential to be a masterpiece.