A full beard refers to facial hair that covers the bottom portion of the face and includes well-defined sides and shaping. A full beard can be any length – from long stubble to chest length.

You may think that full beards are always bushy, but there are many styles that look neat and polished as well, making it easier than ever to sport a full beard look. Here are 65 fashionable looks to get you inspired: 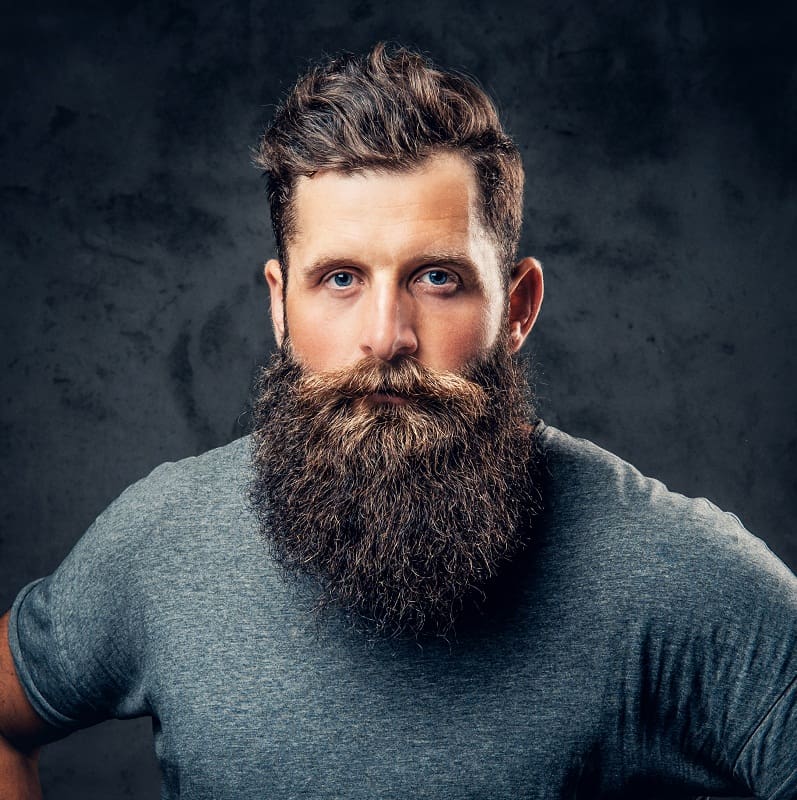 You can’t get much fuller than a big, bushy beard. It’s long and scraggly, unstyled and natural. The mustache covers the top lip and extends into the beard on the ends, leaving a peak of mouth showing through.

# 2 Neat with Clean Edges Around the Mouth 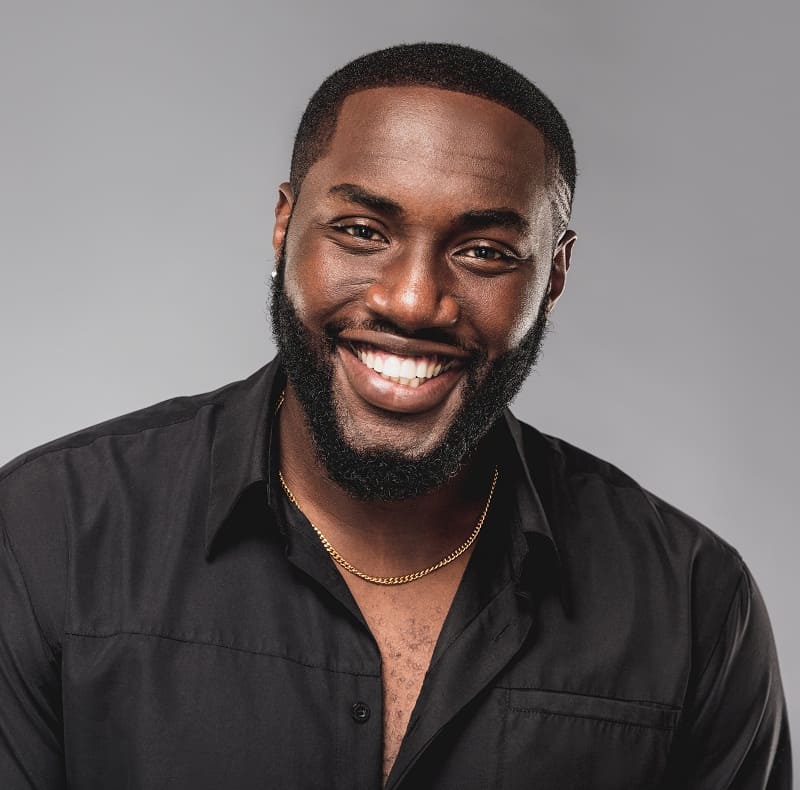 This is a far neater beard, tight and trim to the face. It differs from a regular full beard as much of the large chin is left hairless – great for avoiding mess when eating. 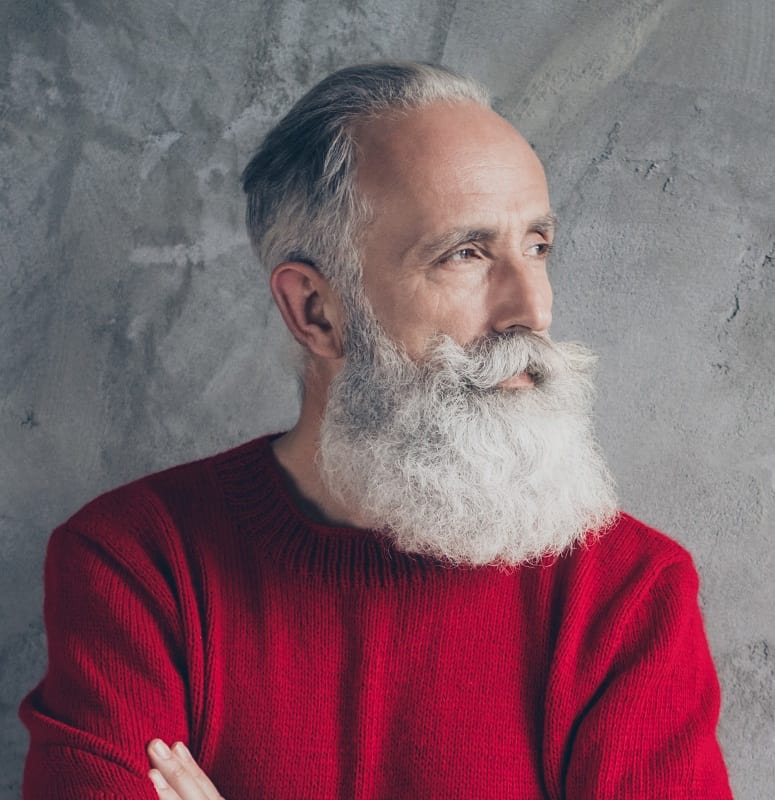 This coarse white beard is reminiscent of the Santa style, great for grandfathers wanting to entertain grandkids. The moustache is bushy and long, upturned at the ends to add some class. 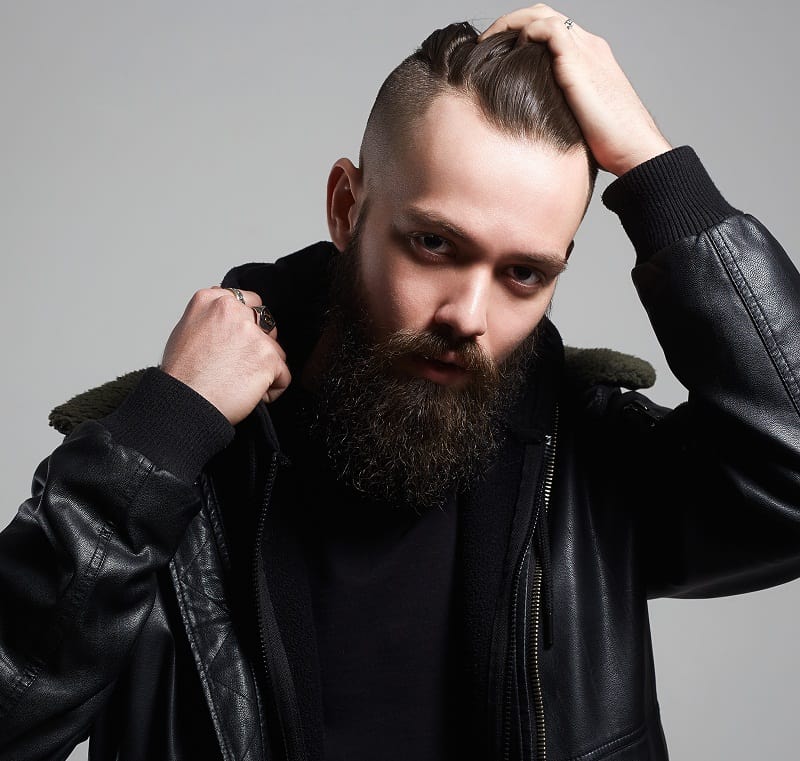 This beard is long and scraggly but appears neat. It has a perfectly rounded bottom edge and the mustache is lightly parted so almost the entire mouth is visible. 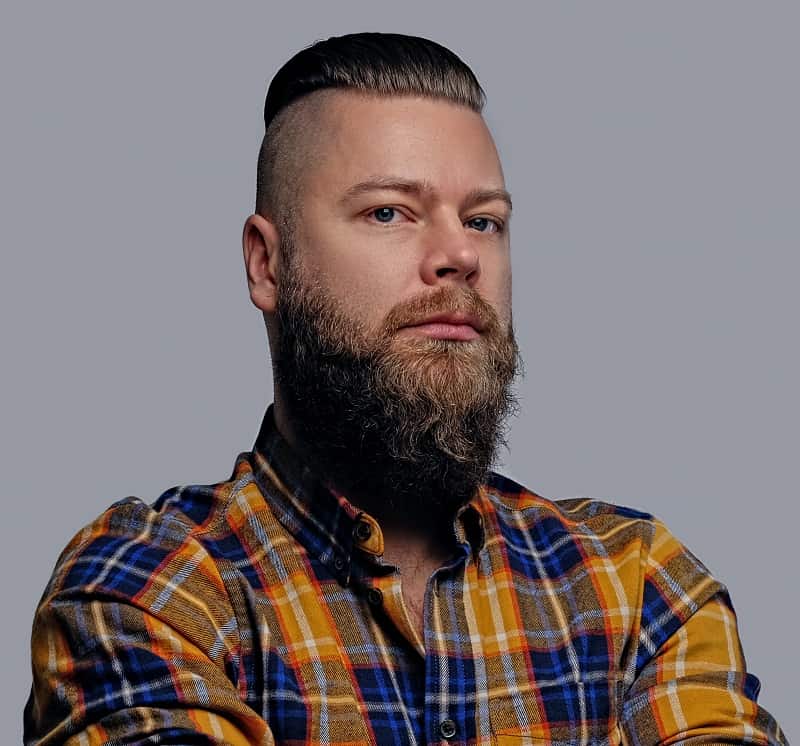 This full beard falls in layers, shorter on top while the bottom is dark and busy. The mustache is short and keeps the mouth area clear. The color variance here really draws the eye.

For a full beard look that doesn’t look untidy take care to keep your neck clear. Let your beard just curl over the jaw line, then keep it neatly clipped in a rounded shape like this model. He’s wearing his facial hair with natural lines over the cheeks and a full moustache.

In this picture, the model has a full beard at a medium length together with a moustache. The moustache just hugs the top lip and the texture of the hair seems soft and well cared for.

Instead of brushing the tips of his moustache into his beard this model has styled his handlebars to sleek straight out over the facial hair. He’s wearing a medium long beard, which has been expertly shaped.

Men with red hair often have striking shades in their facial hair – another good reason to grow one! This model has shaved some of the hair below and around the lips to create a soul patch and separate the ginger moustache.

See how the moustache has been trimmed to have a straight line just above the lips? This type of moustache looks great with his neatly trimmed ginger beard and soul patch.

If you want a softer looking style like this model, then don’t shave the area around the cheeks too harshly when you are shaping. These natural looking edges and the curly hair texture make this a sexy bearded look.

In this picture, the beard has the most volume over the chin and the edges have been neatly rounded off. He’s keeping his neck clean and has added a handlebar moustache that sits just above the lip.

To draw attention to his long moustache this model has shaved underneath his lip, leaving a section of hair in the middle. He’s allowed his mutton chops to grow out as well and this facial hair is the same length as the bristles under the chin.

This beard has been well shaped along the bottom with natural lines along the cheeks. He’s also wearing a moustache that dips over the side of the lips to join the hair below.

This model has allowed his facial hair to grow out so that it covers the jaw and front part of the neck completely. He’s wearing a twisted moustache – this look is easy to achieve if you use the right kind of wax to hold it in place.

If you have a top heavy hairdo like this guy a beard can help balance your face. He’s opted for a simple look where the hair just reaches over the jaw line and he’s wearing a moustache that connects with the rest of the facial hair.

A beard like this doesn’t happen overnight, but if you are patient and attentive you could definitely get there. This style stands out with its rounded shape along the bottom, full texture and neatly parted moustache that covers the lips.

If you want a neat, put together look, try to make sure that your facial hair is well shaped along the cheekbones and that your moustache sits above the lips. This guy is hitting all the right notes with a full, short beard that is maintained and well conditioned.

This model has created eye-catching contrast by shaving the sides of his head and allowing his beard to grow out from the sideburns down. The texture of the hair is curly and it has been neatly snipped into shape.

In the workplace, you need a look that is suave and sophisticated and bushy unkempt styles simply won’t do. Copy this guy and keep the hairlines on your cheeks straight edged and round the beard off under the jaw line.

In this style, the facial hair has been grown out all around with the hair under the chin and the moustache slightly longer. He has parted the moustache and is wearing it brushed out over the beard.

To make a bold statement you could team a skinhead look with a full beard such as this. He’s allowed the hair to grow to a medium length and he is keeping it neatly trimmed and brushed.

This guy has trimmed his beard into a rounded shape along the cheeks and has kept the hair long enough to just dip over the jaw line. Adding to the refined feel of this style is the neck, which is clean shaven.

For a trendy look, you can style your beard into a squared off shape underneath like we see here. This beard also has ruler straight lines on the face and while the moustache is also full the lips have been kept open.

Hipsters love all things vintage and this beard style is definitely timeless! The long bristles have been trimmed into a sharp shape under the chin and the tips of the moustache are pointed.

Add to that vintage feeling by having an old school haircut and getting some wide frame glasses.

In this picture, the model has a short full beard with the majority of volume under the chin. The neck is neatly shaven and the facial hair has been snipped into a rounded shape under the jaw-line.

He’s also wearing a short moustache that sits just above the top lip.

It’s worthwhile to have a barber trim your full beard if you want a pristine look and sharp lines. Here we see the sides being trimmed, the pleasing round shape under the chin and the blunt cut moustache.

This is an example of a masculine and rugged style beard. The facial hair has been allowed to grow out full and has a natural bushy texture while the moustache is kept off the lips by brushing it out into the beard.

Here see a style that has a lot of volume along the sides as well as in the front. This is because the mutton shops have also been allowed to grow long. To maintain a sleek look like this make sure you use beard oil and a good comb.

In this picture, the facial hair covers the bottom half of the face with more volume over the chin area. The sides have been snipped shorter and he is wearing a squared off the moustache.

This beard has been grown out, but is being kept at a short length – notice how the hair just covers the chin. To balance it out he’s wearing a longer moustache that clears the lips and joins into the facial hair on the sides.

Dark coloured hair makes for spectacular beard styles similar to the one seen here. This model sports straight lines across the cheeks, a squared off shape in front and a handlebar moustache that lifts up over the beard.

Here the facial hair has been grown long enough to just cover the chin and jaw line. He has parted his moustache and brushed it into the beard. He’s keeping this look polished by keeping the neck shaved and shaping the hair appropriately.

This model has a light coloured beard which looks quite distinctive and definitely lends a gentleman type tone to his style. He’s keeping it at a short length and is also wearing a short moustache that hugs the top lip.

This is quite an interesting style – the cheek line has been curved and brought in under the nose and then back up to the other side. The beard is rounded off under the chin as well and the narrow moustache has been trimmed to a medium stubble length.

Full beards can disguise a multitude of problems – including a double chin. The style of beard pictured here is perfect to hide away chunky chins due to its length and shape. Balance a full, squared off style like this with a neat moustache.

Full beards don’t always need to be long and bushy. For a more manageable look, try a short look like this together with a squared off the moustache. As long as you keep it shaped and combed it will always look trendy!

Want to impress your clients? First impressions really do matter so if you want a full beard, try and keep it uber professional like this gentleman. The beard and sides have both been trimmed into round shapes and the facial hair and moustache are at a medium-short length.

Here the barber has given the sides of the beard an angular shape and rounded off the growth under the chin. The model also has a moustache that brushes on the top lip and dips over the sides of the mouth to join the rest of the facial hair.

In this picture, you see an example of a long stubble beard. This is a great look especially for younger guys wanting to try a bearded look. Some men opt to keep their beards at this length, which makes them easier to maintain.

Longer beards do take time and they do require a fair amount of effort, but if you want to join the ranks of handsome bearded men then it will be worth it.

Choose full beard styles that tie in with your personality and lifestyle and make sure you have the skills and products needed to maintain your look!