55 Ultimate Long Beard Styles – Be Rough With It

To grow a beard takes patience, but if you persevere and look after your beard you could soon have an enviable look. Long beards are manly and handsome and also right on trend; provided they are well maintained.

So if you’re ready for a beard check out some of the many funky styles that you may enjoy!

In this picture, we see a well-established beard and moustache that has been allowed to grow out. Off the chin, the ginger blonde hair has been split in half and each half has been braided.

This beard begins high up on the sideburns and has been grown long. The moustache has been trimmed shorter and the beard itself has been shaped with a squared off cut. This is a manicured, neat style for a long beard.

In this hipster look beard, the facial hair once again begins in the sideburns and has been grown out. The moustache is quite long as well and has been combed out into the beard. The thick hair has been snipped into a round shape.

In this picture, his ginger brown facial hair covers the lower portion of the face and he has a moustache that has been snipped straight. The hair is longest over the chin and is rounded off neatly.

# 5 Hoorah For The Handlebars

Slowly sneaking back up the men’s beard fashion chart is the trusty handlebar moustache. Once reserved for villains and evil business this long twisted moustache is going mainstream again.

It’s a bold look to wear and looks great with a manicured beard like this one.

Jason Momoa, who you’ll recognise as Khal Drogo from Game of Thrones, wears a bushy beard and full moustache in this picture.

The hair is tapered towards the front creating a triangle shape and he’s totally rocking the salt and pepper look!

No longer just for mountain men, the long, full beard is right on trend in 2020. This beard completely conceals his jawline and chin and has been clipped to have a shape while still looking natural.

He’s paired it with a long handlebar moustache, which has been twisted at the ends.

In this full mustache and beard look, the hair along the mustache has been trimmed short so as to just hug the lip. The beard is thick and covers the lower jaw and chin entirely and has been clipped into an A-line shape.

Here the beard is more rugged after being grown out; a natural look. The mustache is also full, but unlike the beard, it has been kept clipped. As an extra detail, we can also see that a few small braids have been added.

In this picture, we see Jason Momoa with a longer beard. This time, the beard has been collected and tied into a beard ponytail.

He’s sporting a full beard, with growth on the sideburns, chin, cheeks and moustache, however, the moustache is trimmed to just above the lip. 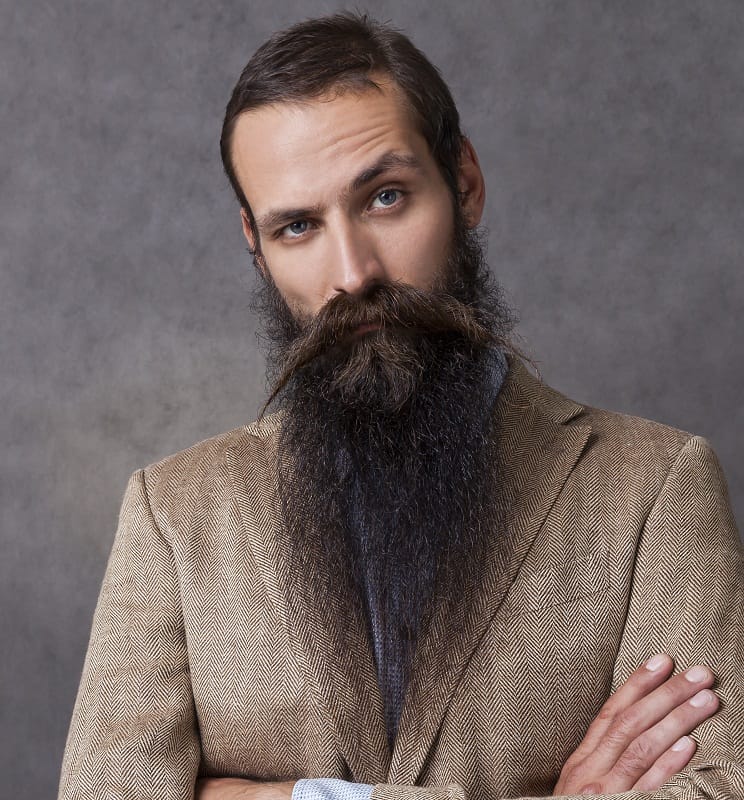 A long pointy beard will definitely make you look out of this world.

Get a short haircut with swooped on one side top hair and let the beard and mustache get all the attention. 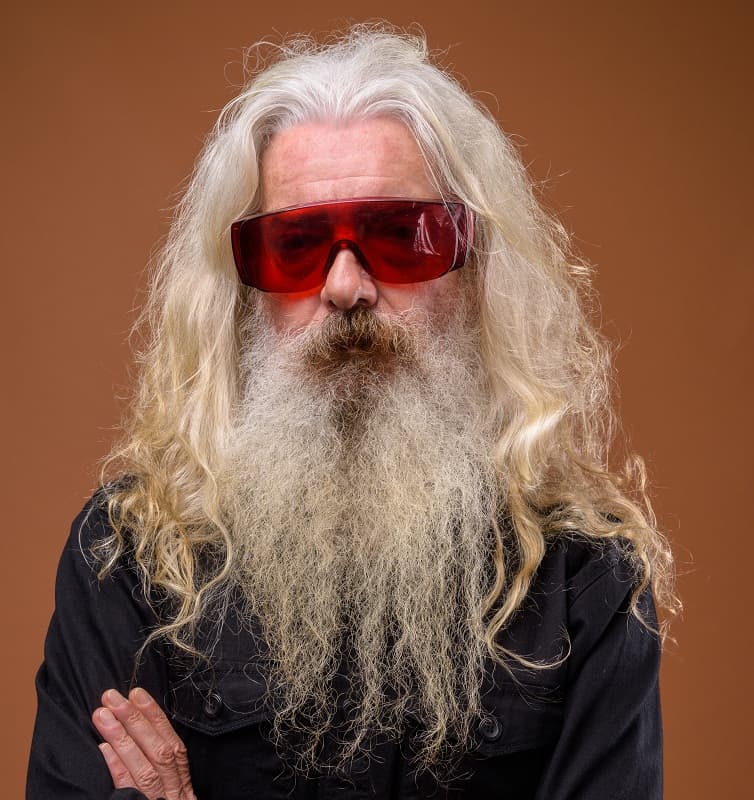 If your beard is very curly, you can keep it like that or blow dry it and straighten with a brush.

It will suit your long wavy mane, and with a modern pair of red sunglasses, you’ll look so state-of-the-art. 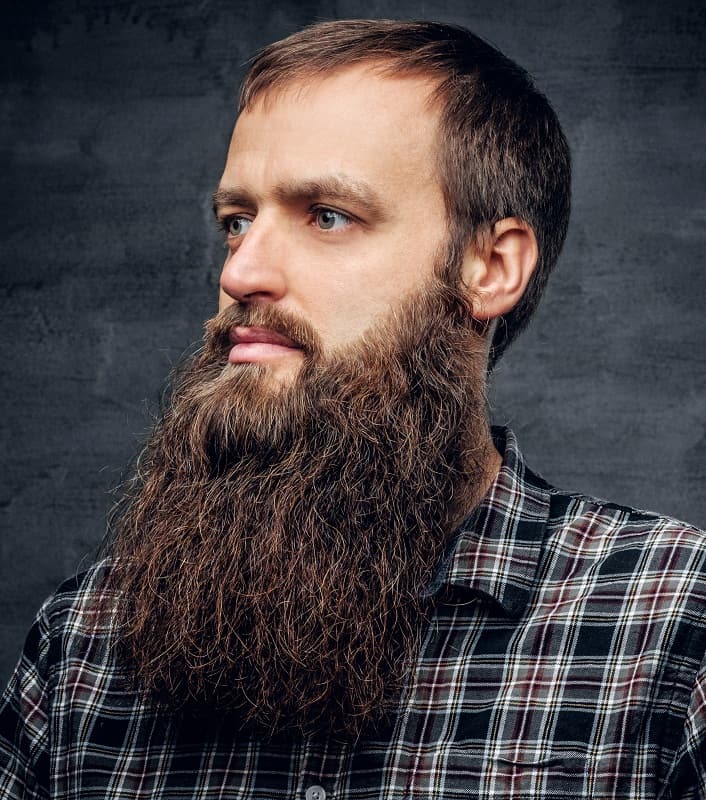 Combing and applying oils is a thing you’ll have to do on a regular basis if you want your long beard to look spectacular. 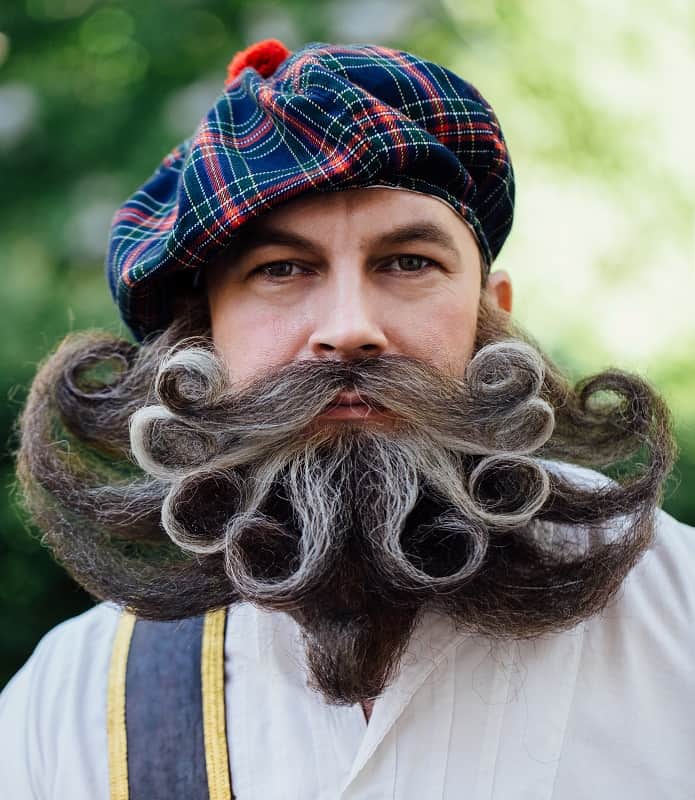 So if you are a guy who wants an original beard style, get ready to steal all the attention with this rounded lifted approach. 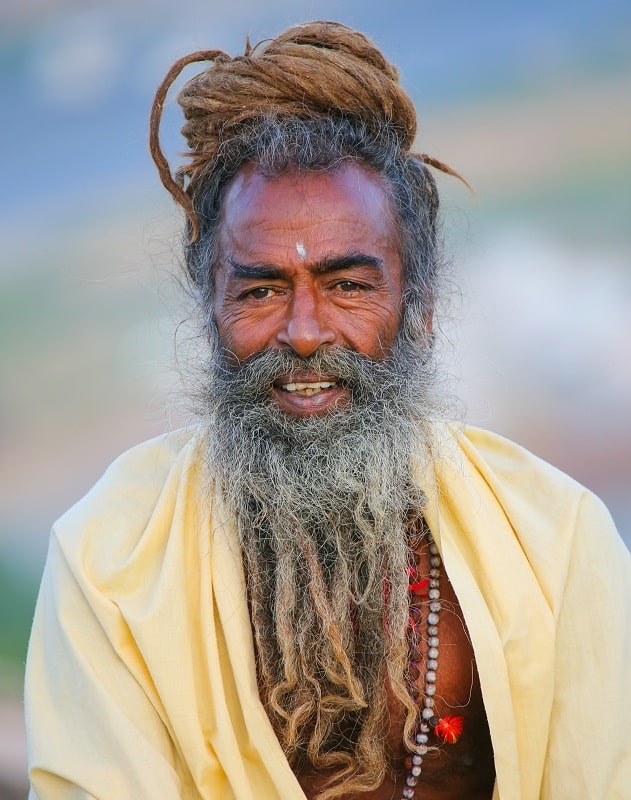 If you adore rasta looks, you can style dreadlocks not only for your mane but also for the beard.

You need to make sure it is long enough once you start creating the dreads because the hairstyle will totally cut the length. 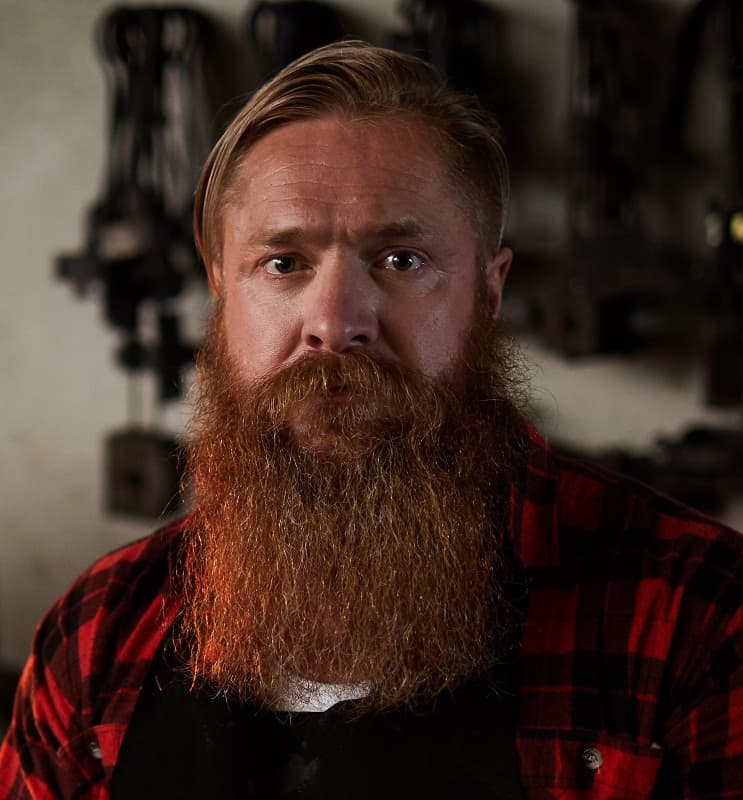 If you want to grow a long beard, you’ll have to stop trimming it for at least four weeks until you’ll be able to give it the desired shape. If the look you want to pull of is considerably longer, you’ll probably have to wait even more before you can use the trimming machine.

Also, use oils that will provide all the nutrients your beard needs to look healthy once it’s long. 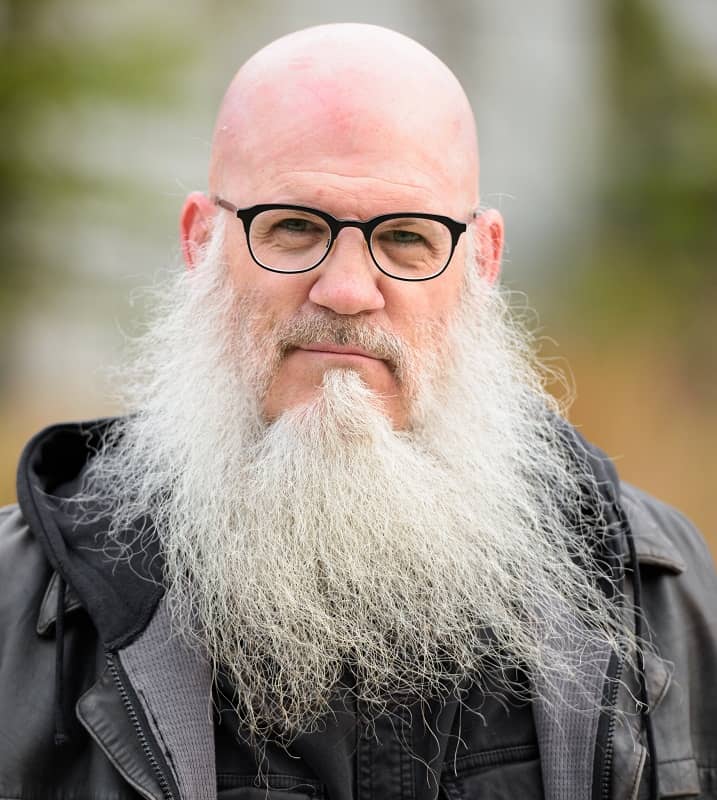 When you want to keep the beard long, grooming is part of the process and also is applying oils. Keep it as long as you wish, but trim the hair around the mouth.

To get this fantastic ponty look for your beard, keep its sides shorter and design a V-shape for the chin hair.

Also, if you want to master a hipster appearance, create a mustache and make the tips go roundly upwards.

If you want a flawless look for your beard, wash it with special beard shampoo and conditioner and blow-dry it.

Use a rounded brush to gain that perfect straight look.

You will discover that behind any gorgeous long beard is a man with a lot of patience that uses proper skincare products and oils.

Growing a healthy beard is essential because each thread will have a stunning glow.

A beard can look untidy when it is allowed to grow unchecked. Here we see an example of excellent beard grooming – keeping the hair in a neat shape and creating shaved lines on the face.

In this picture the moustache is a little longer, just brushing over the top lip.

It’s important to look after the hair in your beard by using the right products to keep it conditioned. This full beard is clearly well maintained and has been shaped to keep its natural form.

There is a handlebar moustache as well, that has been combed into the beard.

In this picture his long full beard has been secured right at the end with a piece of elastic, bringing the hair together in a pleasing shape. Notice how soft and shiny his beard is; obviously very well cared for.

In this picture, the beard completely covers the lower portion of the face and has been trimmed into a squared off shape. The moustache is long and has been divided into two sections and twisted outwards to create interest.

Here the beard has been kept in a natural shape and brushed out to fall straight down. The moustache is long as well and has been combed into the beard.

Wow, what a red! Here we see a full beard that has been trimmed into a rounded shape at the bottom. Notice how the hair from the soul patch has grown out a lighter shade?

The moustache has been brushed to the sides but still almost covers the lips.

Clean straight lines on beards are very trendy, just like the beard featured here that has been squared off to have a pushing forward feeling.

In this picture, we see that the some of the neck hair has been shaved to keep the beard in a rounded shape across the contours of the face.

Here we can see that the moustache has only been grown long from the sides of the mouth, leaving the mouth open. The rest of the beard has been shaped to have a natural feel.

This beard has an unusual texture that has been created by crimping the beard to form waves. His long beard hair looks quite well conditioned, which has made this look possible.

This beard has a great curly texture and manages to look wild while still being manicured – very handsome!

Here the beard has been grown full and long and then snipped to match the shape of his face. His white beard has a refined gentleman look and he’s teamed it with a darker moustache.

This beautifully hued beard has been grown to chest length and the moustache is long as well, but has been brushed into the beard to open the lips.

The well-established moustache dominates this look. It’s been parted slightly and styled into tips; set against a full beard.

Long beard styles are suave and fashionable; particularly the full beard style where the hair grows long from the sideburns, chin, cheeks and upper lip.

Long moustaches are also popular and can be worn over or above the lips. Whatever your hair colour there’s never been a better time to let your beard grow out long and free!