So you’ve grown your hair out – now what? Now you need to style it of course!

There’re various looks that you can try and one of them is definitely braids; particularly fishtail braids which are becoming quite trendy for guys and girls alike.

The fishtail braid, sometimes also referred to as the herringbone braid, is created in a similar fashion to the French braid. The difference is that instead of using three sections of hair (as with the French) the fishtail braid uses only two. Let’s have a look at this and some other braids as well.

This is relaxed look; a few braids run the length of the head and end in smaller braids which rest casually against the shoulders.

In this picture, we see three smaller fishtail braids on the side next to a large braid that runs down the center. The pattern was repeated on the opposite side and the braided ponies were tied in place.

Here we see a style that features a tapered undercut with longer hair in the top section. These locks were divided in two and each piece was skillfully braided, with the two braids meeting at the back.

This is an interesting look and may have taken some time to achieve, but it was well worth it. There’s an undercut along the bottom section with a braid along the middle side.

The end of this braid joins with the rest of the hair, which has been brushed back, and is styled in a man bun.

When you have short sides with long hair on top, a braid can help keep you looking neat and stylish. This style is great with its bold, black braids and hard parting.

This look features a thick fishtail braid on top of the head that has been colored platinum blonde. The buzz cut sides have been left dark.

The two braids that run along each side here look so intricate; this is definitely a well put together style. Notice the hard parting and the simple sides.

In this picture we see that his long hair was brushed back then styled into a man bun. Above the ears, two fishtail braids were added. 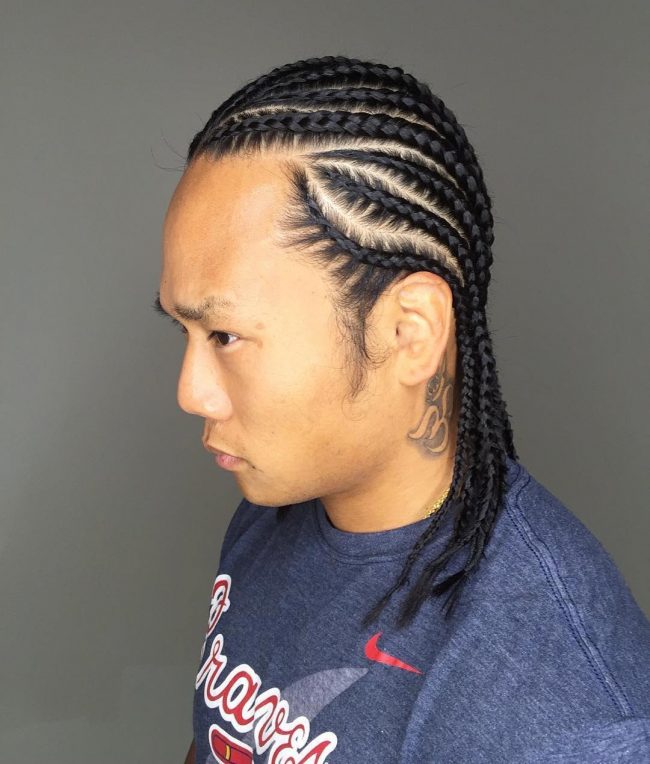 Here a sleek look has been created by styling the hair back in thin cornrows. These cornrows become box braids and just brush the neck. 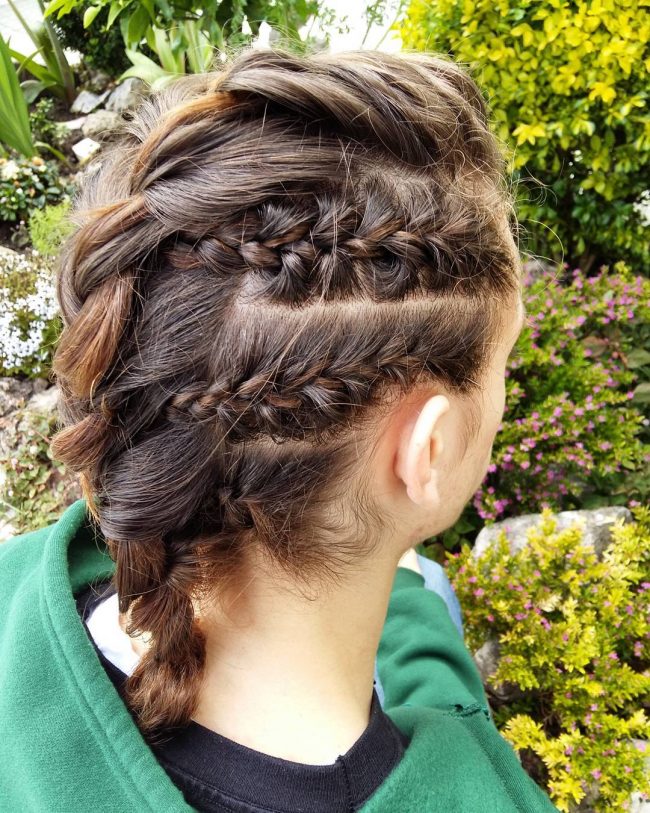 In this look, three French Braids on either side of the head feed into a larger braid that runs from the center of the head down the back. This braid becomes a braid ponytail. 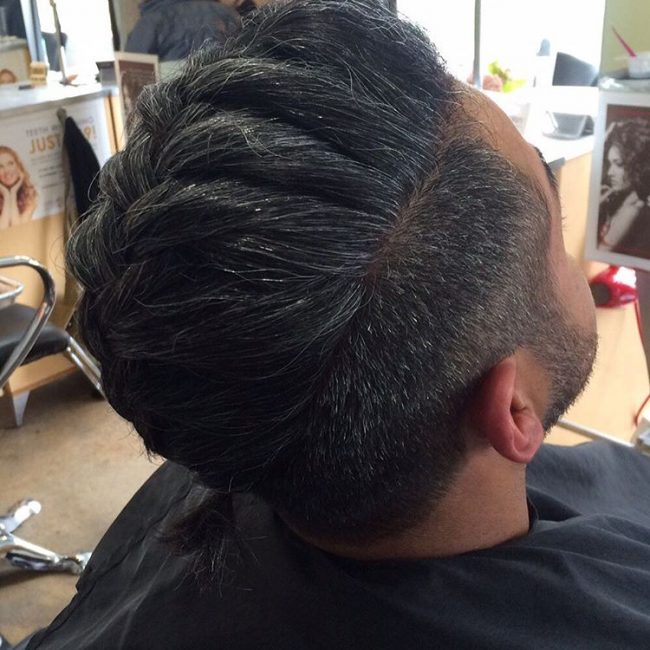 Here we see a man with salt and pepper hair who has a high undercut and thick locks in the center of his head. These strands have been pulled into a thick braid.

The top portion of hair has been divided into two sections. One side has been slicked back while the other side is in a small braid. These two sections meet at the back in a small man bun. 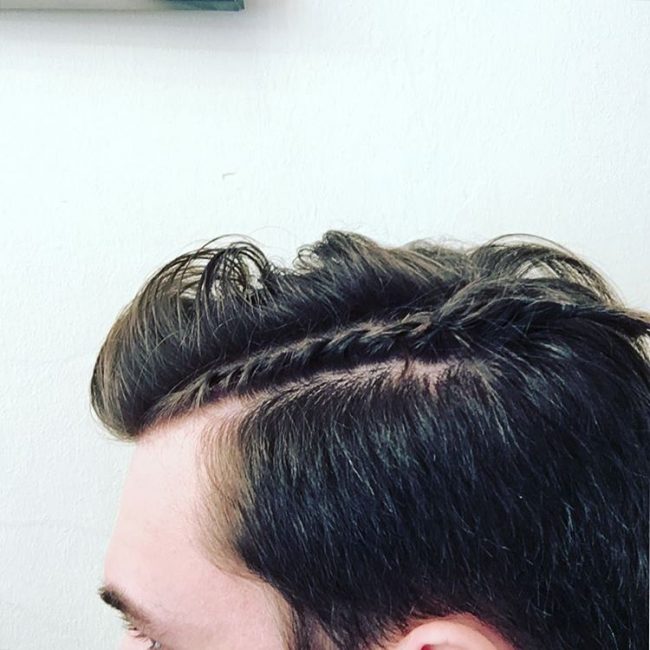 In this picture, a small strand of hair above the parting has been weaved into a short braid with the rest of the hair combed to the sides.

Here the hair has been divided into five sections. Above the ears, the hair is combed flat on both sides and there are two tight braids. Between these two braids is a thicker braid in the top portion of hair.

The head has been shaved bald with only the top section remaining. This hair is long and here we can see it styled in a neat French braid. 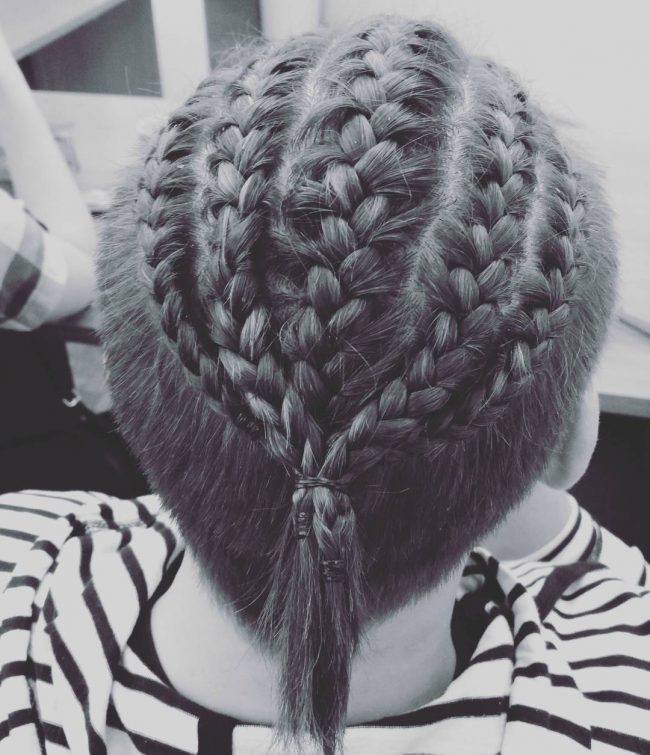 This haircut has a short undercut with longer hair in the center. This hair has been sectioned into five strands and each has been braided. The braids are joined at the back by a tie.

Braids are a great way to have an undercut look without cutting the hair. Here three small braids have been woven just above the ear.

For this look, the hair has been parted by a distinctive zigzag parting and there are two Dutch braids that stretch back from the forehead.

In this hairstyle, a thick braid has been added to the right side of the head. The hair on the left has been combed to flow into the braid.

Here a long braid runs up to the crown. This braid sits beside a hard parting and an interesting undercut.

In this picture, the hair was combed up and sectioned before being fashioned into an intricate braid. The braid is secured in a small man bun and is made more striking by the ash gray hair color.

The longer hair has been parted down the center and the two sides have been plaited into large eye-catching braids. 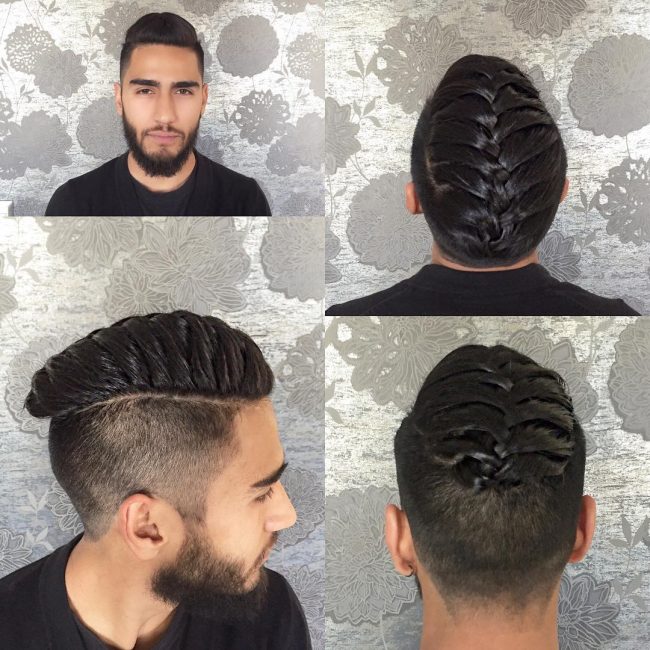 This sleek look has been created by weaving his hair into a shiny fishtail braid that sits sleekly on his head.

Here his long dark hair has been braided from the front to the back and flows into a plait. This plait is secured with a tie and rests against the undercut.

Braids can help to keep long hair tidy, especially when you are busy. In this example, there is a high undercut and a thick braid has been created down the center.

In this picture, his hair on the sides was scraped back while the middle portion was braided. At the back of his head, we can see a twisted man bun.

Here we see a fishtail braid running to the back of the head and tied with an elastic. The remaining hair has been parted and has loads of volume. 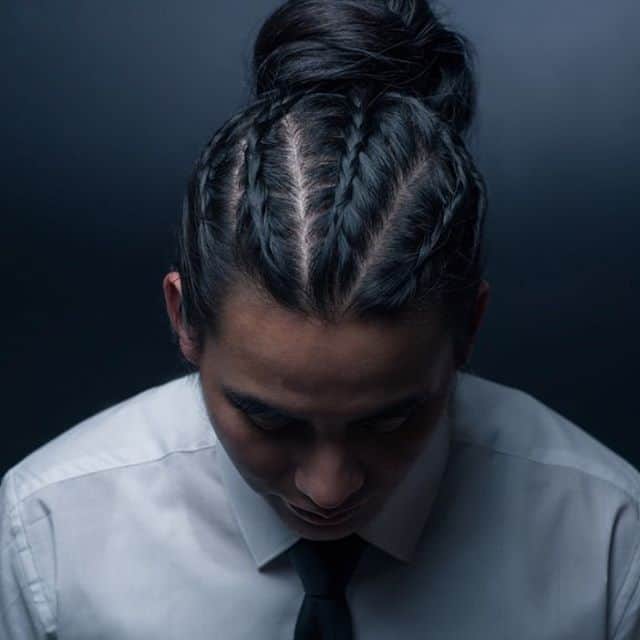 His hair has been parted and sectioned into numerous strands and these strands have been pulled into fishtail braids. The braids all collect on the crown, where the rest of hair sits in a neat man bun. 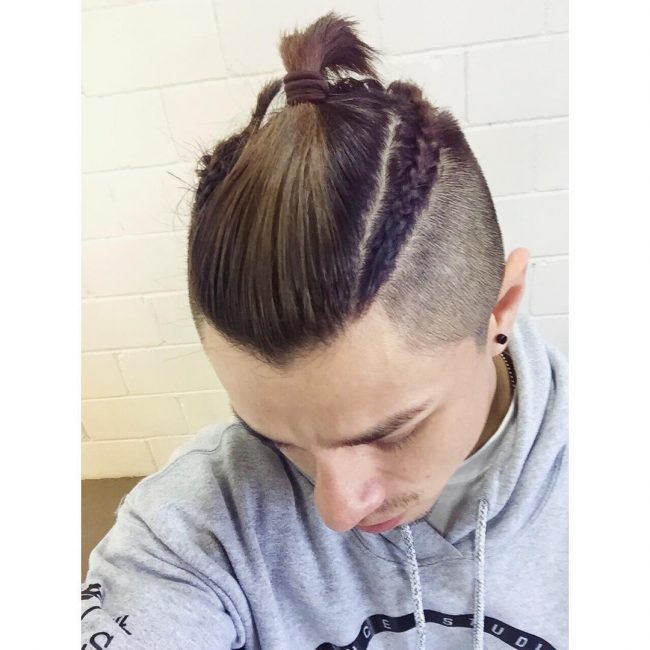 Here a large section of hair has been combed back into a man pony and on either side, a small braid has been fashioned.

In this style, a turquoise braid has been woven into his hair starting around the crown. This braid becomes a short plaited pony that sits on top of his undercut. 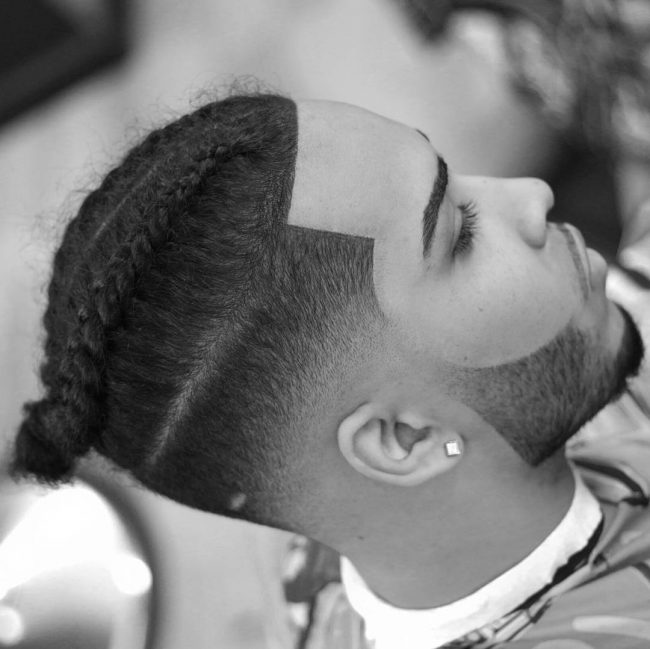 By now I’m sure you want a braid. What are you waiting for? There are many helpful tutorials online about how to do your own braids. It only takes a little practice and soon you’ll be right on style with your own fishtail braid!

5 Shampoos That Solve Your Scalp Issues