Mohawks are considered outlandish bad-boy hairstyles. They exist in numerous variations that range from straight out flamboyant to more subtle versions that can pass off as quite dapper.

Curly Mohawks combine the appeal of faded sides and a thick top with curled or wavy hair. The look is reserved for the bold and tasteful as it never fails to draw attention.

With many different variations to suit different hair types and preferences, curly Mohawks offer a fresh new look for any man who is daring enough to try it. 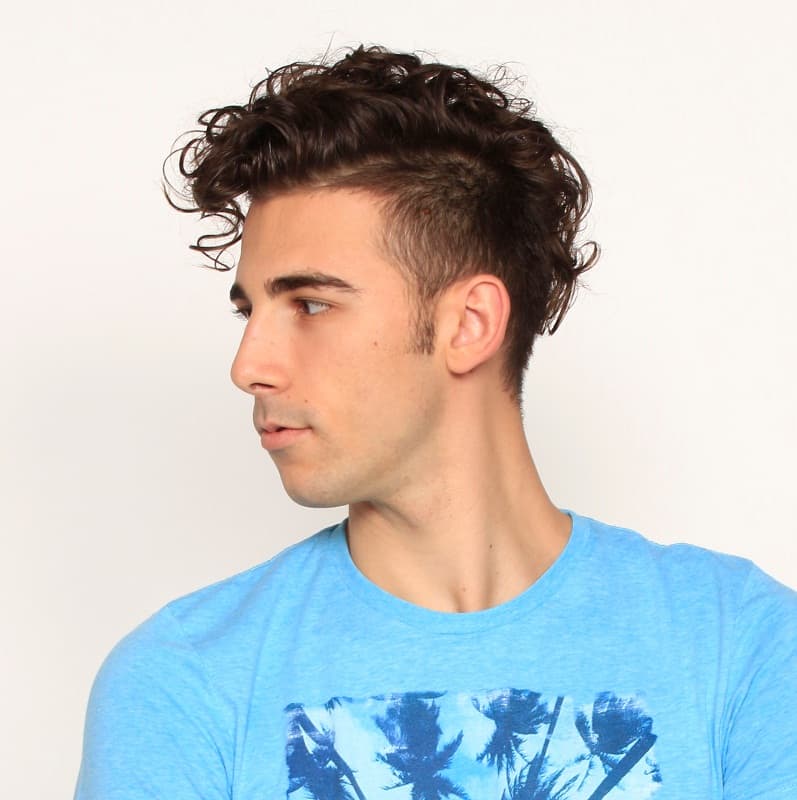 This gentle mohawk style is great for guys who want the edgy look but with a softer edge. The hair is faded rather than bald, with the mohawk style thick, curly and casual for an easy to maintain look. 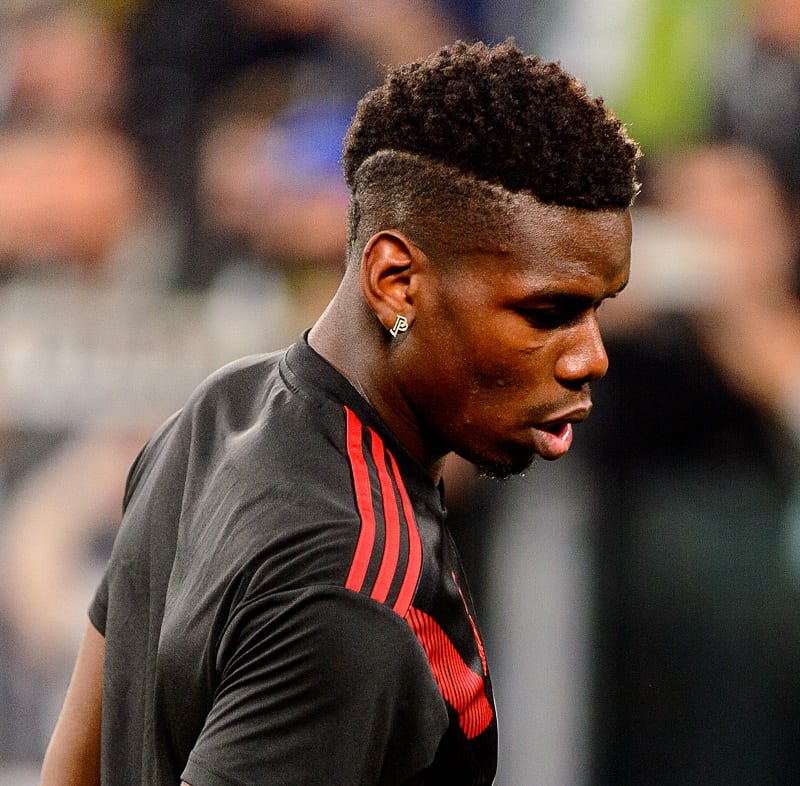 This mohawk has a slight skin fade after a hard parting. The main hairstyle is a mass of tightly curled coils stretching wide across the head. This suits easy-going men who like the mohawk look. 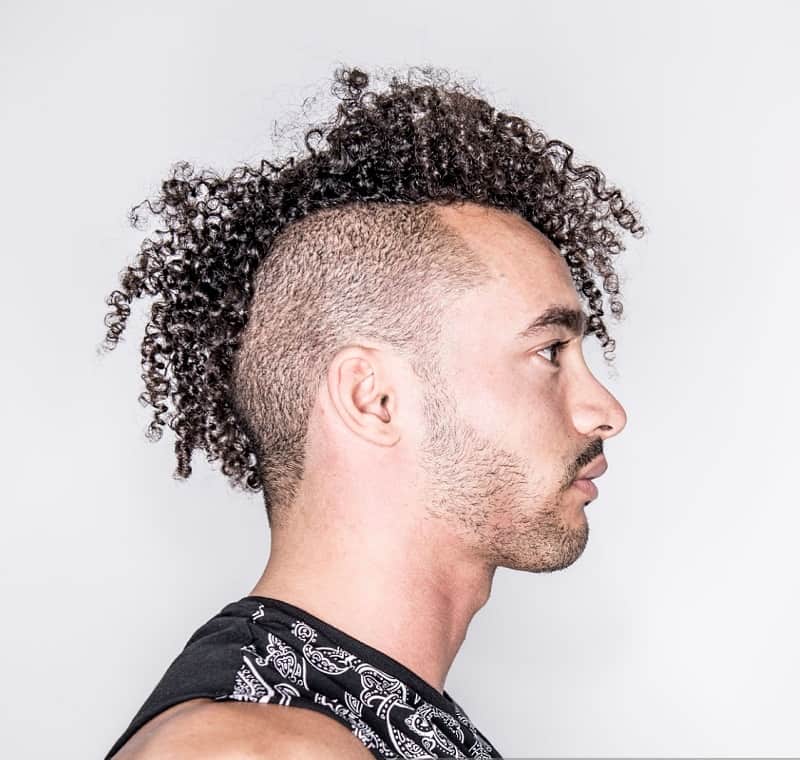 This mohawk has a parting in the middle with sections falling freely in the front and back. The curls are well-maintained but left protruding in various directions, a combination of neat and messy. 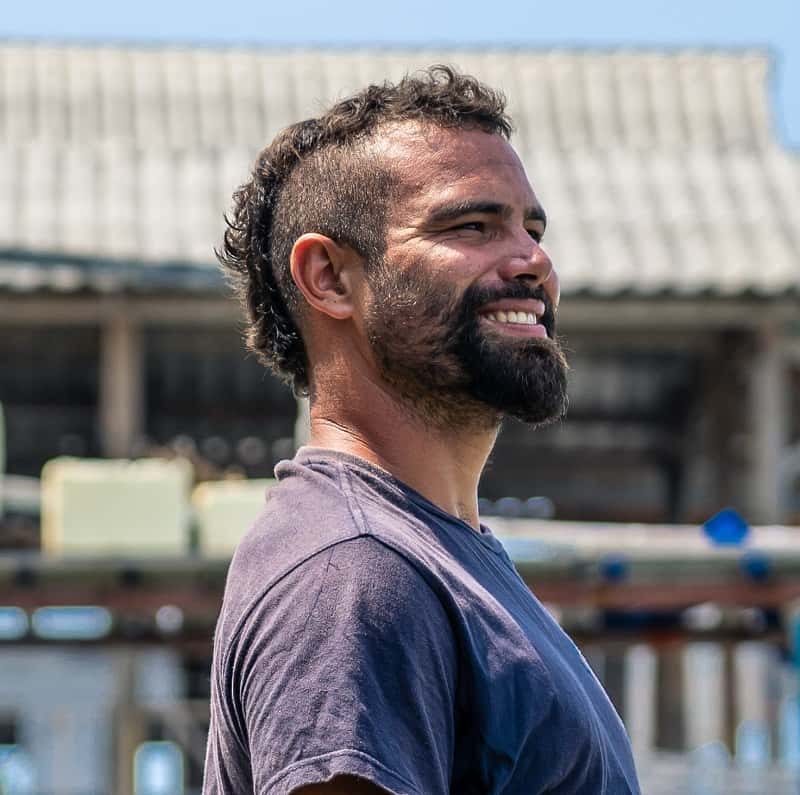 This is a mohawk for guys who don’t like spending time on their hair. It’s messy and unstyled, short enough to leave alone,  The stubbly sides mesh fantastically with the scruffy stubble beard here. 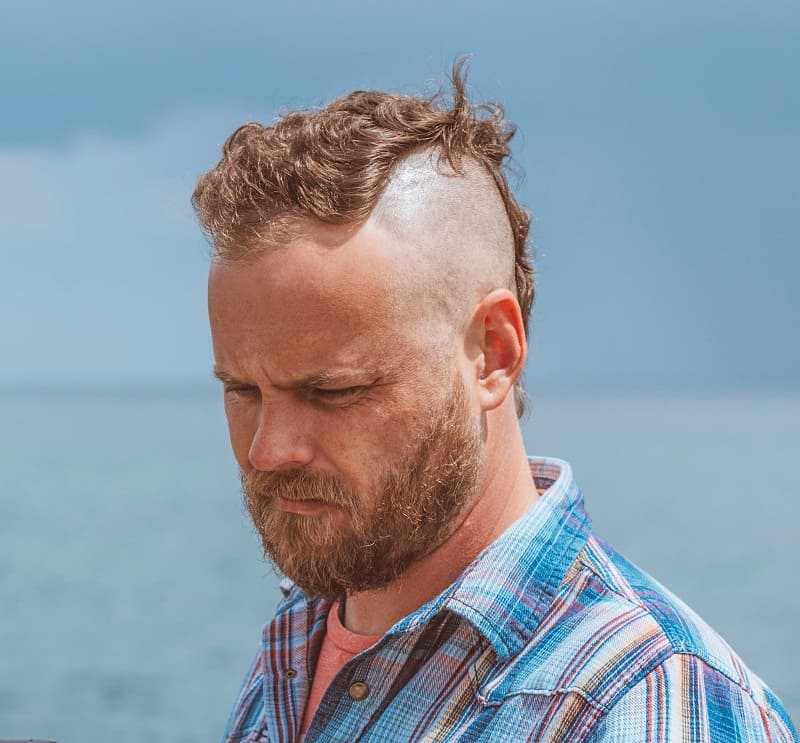 This is a more gentle variation of the style above. It’s less scruffy, slightly longer with wavy curls it takes effort to style. The sides are fully shaved to bring out the hair on top. 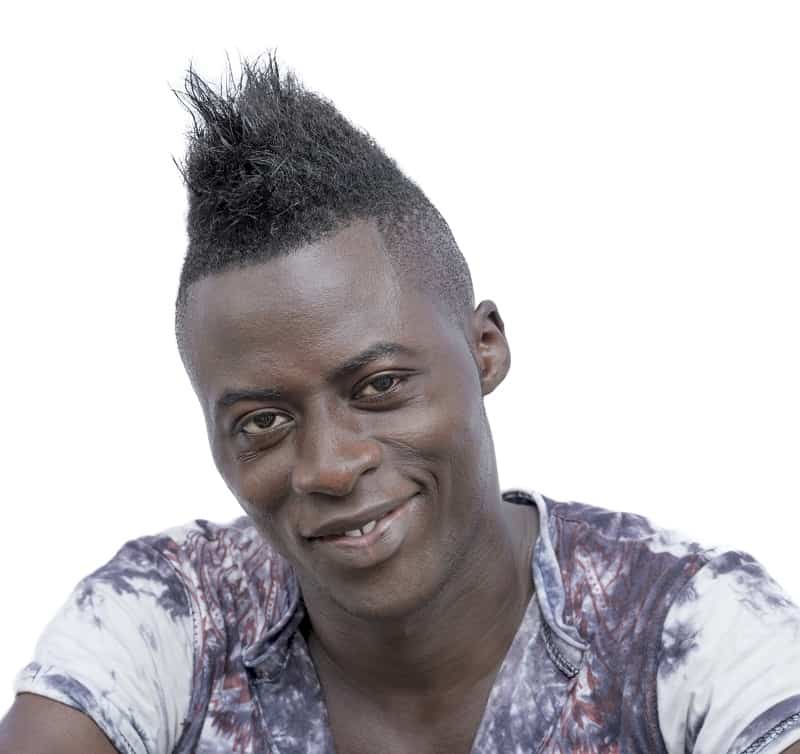 For afro-textured curls, shave all but the top of the head so the focus is on the tall spikes in a mohawk style. It’s curlier towards the base but gets thinner and straighter as it extends. 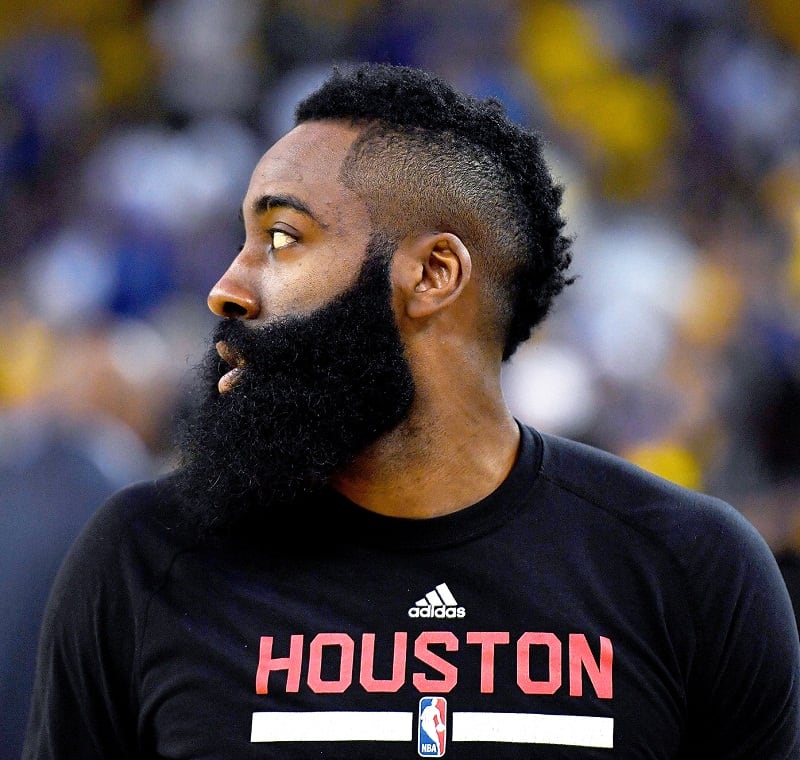 This is a style that takes some maintenance. The mohawk is your average thin hawk from the forehead to the nape of the neck, styled with a curl sponge for soft peaked curls. 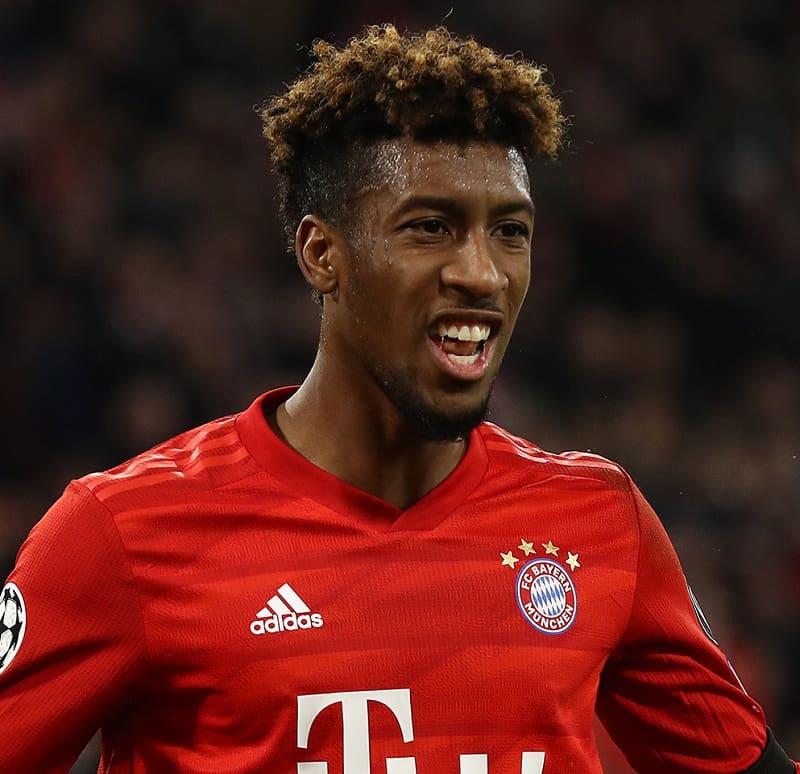 Another hawk styled with a curl sponge, this one is wider than average and full of volume. It gets flatter towards the back. It’s great for framing the forehead without hair falling across the skin. 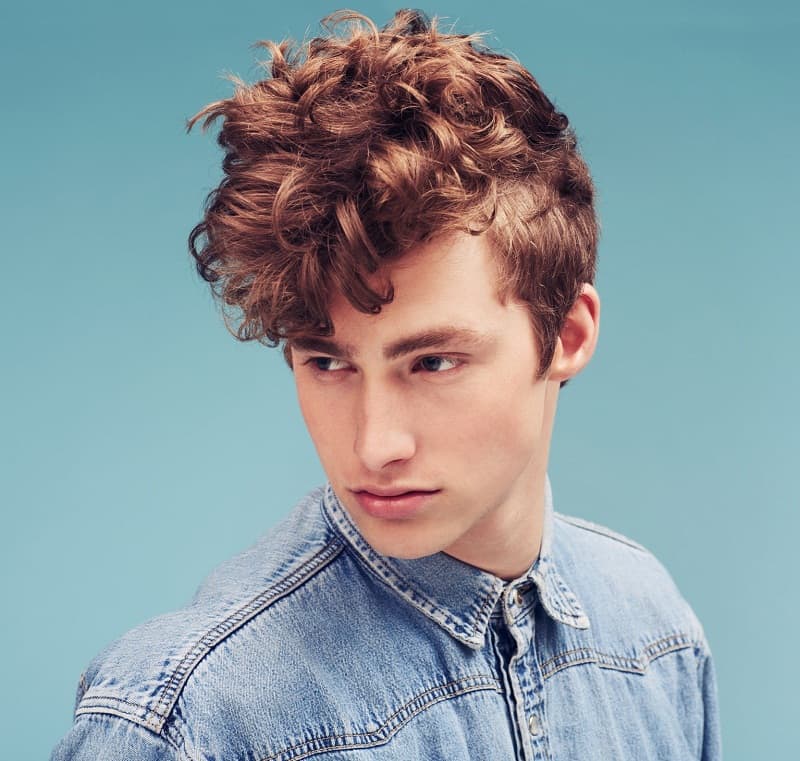 This mohawk style features well maintained, loose curls brushed across the forehead.  The curls are tamer towards the back, tight to the head. This is a look for guys who’ll put the time in to look their best.

# 10 Flat Textured Hawk with Side Designs 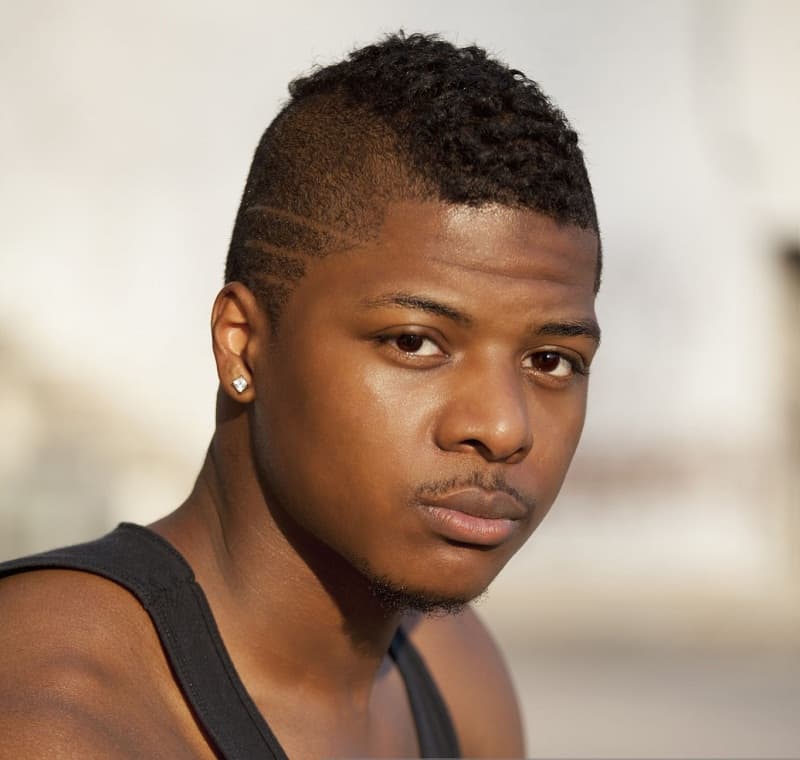 This is a simple short mohawk that still has lots of texture close to the scalp, for easy-ish maintenance. The sides are left stubbly, but with simple striped designs buzzed in for an edgy vibe.

This edgy hairstyle creates a bold contrast with the closely shaved sides and the full-haired top with luscious curls. The highlight lies in the thick curl that extends over the forehead.

The disconnected but shaggy beard is a nice touch as it elicits a rugged appeal that toughens the curly hair on the crown. Admittedly, it takes a lot of guts, and hair, to rock a masterpiece like this.

A ponytail looks good on its own. However, if you add a nice, sizzling fade to the sides with a touch of edgy cuts, it becomes something entirely different.

The thick curls on the crown are tied back in a ponytail while the sides feature a smooth, gradual fade that disconnects from the sideburns. The thick beard adds a very masculine touch to the whole look.

Mohawks look exceptionally stylish with kinky hair. The crown has a thick afro that has been given a spiky twist using Curl sponge hair curlers to make it look rugged.

You can fade the trim on the sides according to your personal preference but the clean, slightly gradual fade with a detached but sharply trimmed beard is part of the appeal.

This look has begun to settle in with most Caucasian males and it can be tinkered with to add zing or just a personal touch. The neat curls on top have been slicked upwards and inwards to emphasize on the shaved sides.

It is a pretty basic look with no gradual fade or even a detached beard trim. Nevertheless, it oozes class and edginess and looks even better with a nice, full beard.

The kinky hair with rugged curls stands out prominently on the crown and exudes a bad-boy kind of appeal. The sides feature a basic fade that is spruced up by flashy trimmed cuts.

To cap off the look, the disconnected full beard adds an oomph that turns the look from juvenile to manly.

You can blow out your top to get that full, kinky afro. The curled afro is shaped consistently all the way to the back. The sides are cleanly shaved with only a hint of a fade towards the crown.

The full beard starts narrow at the detached side burn then goes on to become a full, rugged beard that is oozing masculinity. The whole look is intensely manly.

The thick hair on the crown is heavily curled to look stylishly wavy. The sides are only slightly reduced but the shave is enough to emphasize the prominence of the top hair.

It is a piece that incorporates both classiness and the bad-boy appeal as it teeters right on the edge of formal and informal.

Mixing up the rugged appeal of dreadlocks with the new-age bad-boy Mohawk look is as bold as it is ever going to get.

The locks are thicker towards the front and long enough to fall over the brow. A sleek fade caps off this rugged look with crisp lines down the sideburns.

The Mohawk is more muted in this style but it is still present. The hair on the crown is thick, treated curls that have a noticeable luster, which is part of the appeal. The sides are only slightly faded at the bottom all the way around with crisp cuts to outline the edges.

This edgy look entails a crown with a thick frizzy afro that boldly stands out all the way to the back. The sides are sharply faded towards the bottom and behind the ear, and a crisp trim is used to part the top from the side.

The asymmetry brought about by the lopsided cut is also part of the flashy appeal.

Frizzy blonde curls adorn the crown in this stylish Mohawk design. The contrast brought about by the dyed curls at the top and the jet-black faded sides makes it a party look. It is a very bold look that can be reserved to the adventurous.

This audacious Mohawk features a frizzy crown with subtle curling that exudes a rugged appeal. It slightly covers the brow and runs all the way to the nape of the neck.

The highlight of the hairstyle is the exquisitely trimmed sides that feature a series of inlaid stars formed with crisp lines.

This look can easily pass off as formal because its simple design is not too expressive but is also not too dull.

The crown is lined with short curls that are at the perfect height to run all the way to the back while maintaining a nice shape. The fade on the sides is simple and gradual with a crisp outline on the temples.

This hairstyle is perfect for short kinky hair. The top hair is given some volume and finesse by treating it and curling it.

It runs all the way to the back where it is given a slightly slimmer tail. The sides are shaved thoroughly with only slight fading upwards and towards the temples.

Definitely one of the more brazen looks, this hairstyle features a thick, curly crown with clean-shaven sides.

The look is perfect for showing off your facial tattoos without having to resort to going bald. It is an extremely daring look that only fairs well if your skin is well inked.

The hair on the crown is more wavy than curly as it features treated curls that go up to the nape of the neck.

It is a neat look with an inherent aspect of style drawn from the simplicity of its crisp fade and sharp outlining at the temple and the clear disconnect with the facial hair.

One of the more flamboyant designs, the crown features thick, curly locks of hair that has been highlighted with purple dye.

The flashy top compensates for the lack of fine trimming and crisp outlining on the sides although there are a few subtle patterns embedded into the fuzz.

If you have a knack for the gothic, this spiky Mohawk might be your taste. The top features long locks that are curled slightly with a smattering of green highlights on the tips. The fuzz on the sides is only big enough to provide a slight outline.

The focus of this Mohawk lies at the front where the thick curls at the top pour over slightly to cover the brow. The look resembles the Superman curl top but is now enhanced with faded sides that can be further tweaked to add your personality to the look.

This hairstyle incorporates three different hair fads to come up with a brilliant hybrid that is even more stylish. It features a lusciously curled top with the hair swooped over to one side.

The fades are simple with the beard left untrimmed to give the look a rugged appeal.

The top is short ringlety curls with a bit oh highlight at the ends. The sides are shaved and it creates an effect of an ancient Roman helmet.

This look features a full crown with thick curls running up to below the nape. The large volume of the hair looks great against the clean shaven sides of the head as it creates an appealing asymmetry.

The full beard rounds off the look by ruggedizing it and injecting more masculinity.

The original Mohawk design featured hair that was more centered. This look brings back that original appeal with a narrowly centered top of frizzy hair running along the length of the head.

The rest of the head is completely clean-shaven. The bald look is not for everyone so tread lightly on this.

The design of this bold and extremely rugged hairstyle uses crisp outlines and accurate fades to bring out a classy look. The crown is an afro of kinky hair that is well curled with frosted tips adds some edge to the look.

It contrasts well with the dark, smoothly faded sides that have a few crisp lines outlining the back.

This thick and curly Mohawk look draws its appeal from the simplicity of the cut and the contrast offered by the fully haired crown and the clean-shaven sides.

The top features a random smattering of fiery-red highlights that enhances the bad-boy look even further. The list of things you could do to customize your Mohawk is endless.

Be sure to experiment with a few before you find the one that suits you best. Even then, never settle for just one look. Your hair is a great accessory if styled correctly.

40 Best Ways to Rock Beard without Mustache in 2022