65 Sharp Line Up Hairstyles – Precision Styling At Its Best

What is a line up haircut? Sometimes also known as the shape up or edge up haircut this look involves straightening the hairline with clippers.

This means that instead of a natural hairline there are straight lines and sharp angles over the forehead, temples, and sideburns. This results in a clean look that is often combined with a razor fade and comb over.

The line up is also often used together with a hard parting and can be used to tie bearded looks into the hairstyle. Here are some outstanding precision line ups mixed with various hairstyles. 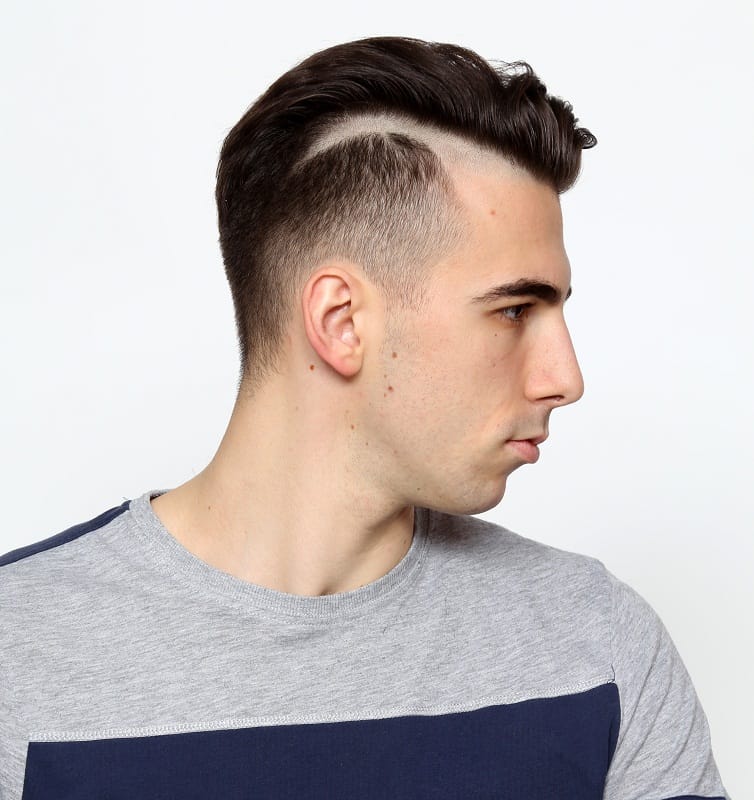 This shaved part line up hairstyle features a separation of long and short hair and a gradual fade. An undercut makes this look low maintenance, always keeping you sharp. 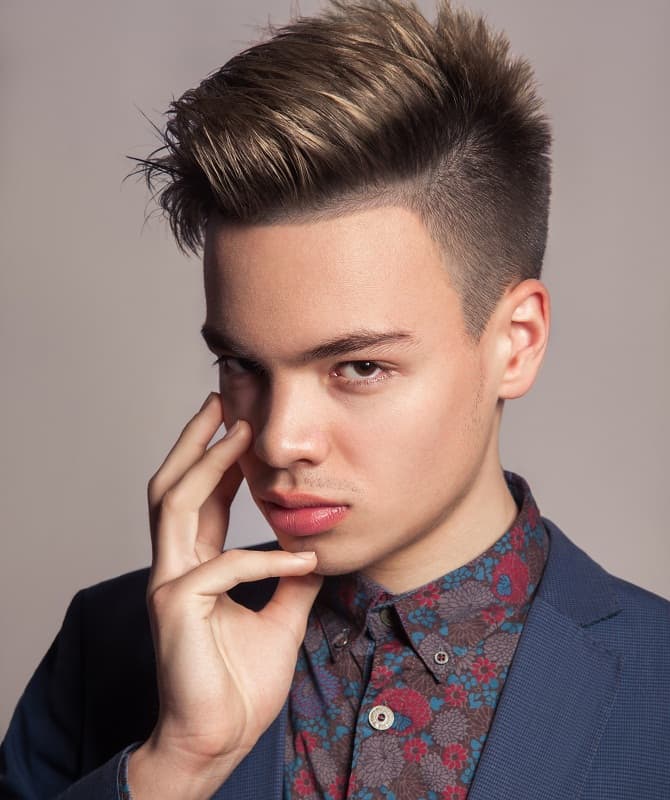 For men with thick hair, a parted line up hairstyle like this one is perfect. It will be easy for you to create the heavy part with spiky texture, and a couple of highlights give dark hair that special glow. 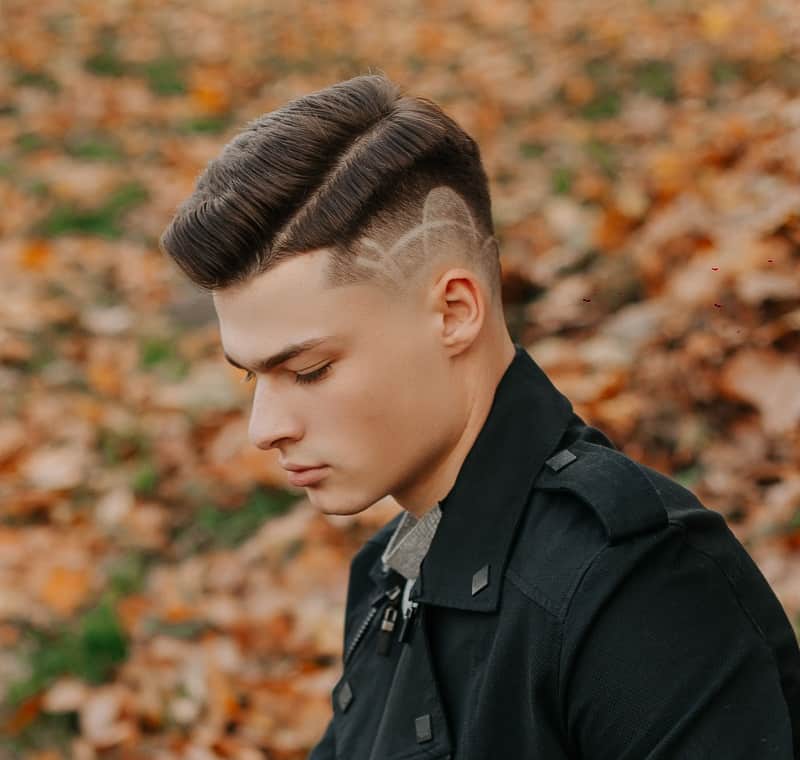 The detail doesn’t stop at the hard part of this line up hairstyle. A gradual fade features varying curved and straight lines. This look is perfect for the man who wants to set himself apart from all others. 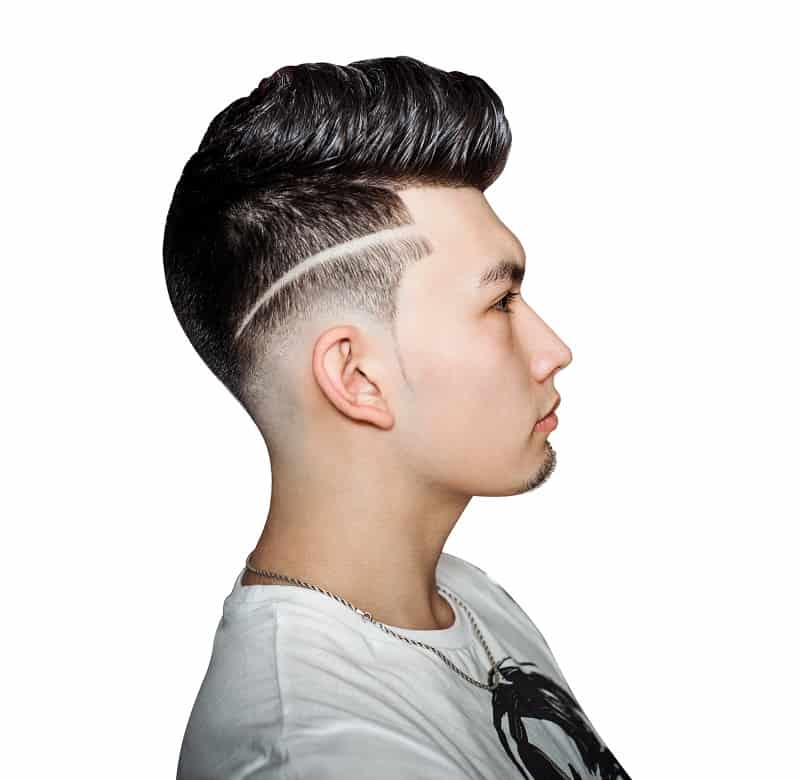 Elvis Presley himself would approve of this shiny pompadour line up. To add more detail to your look, consider adding a shaved stripe or comet shape on the faded sides. 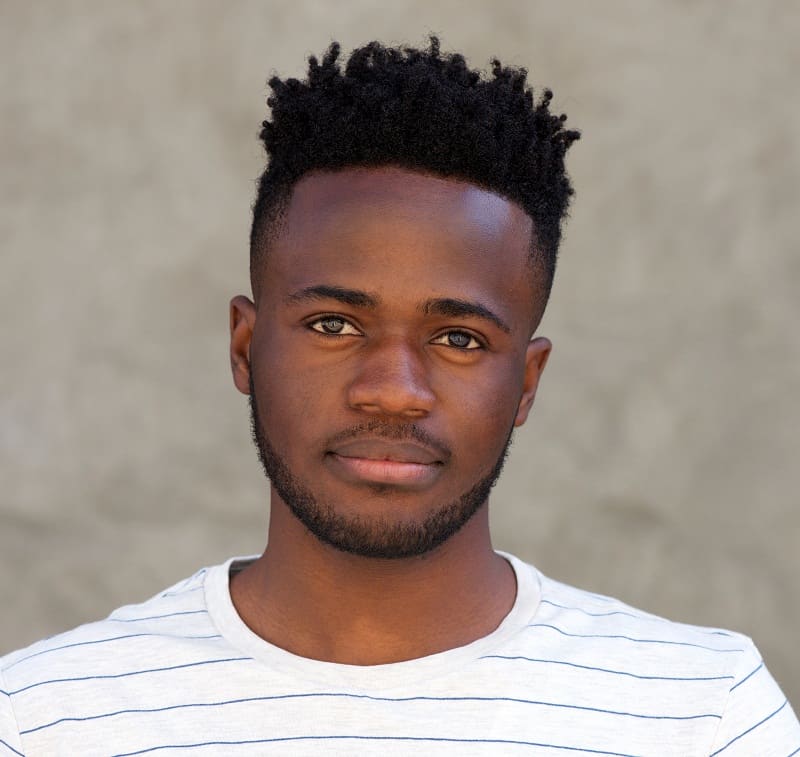 If you’re a Black man wanting to rock your natural hair but in a stylish way, try a line up hairstyle. The top is somewhat long and free of product while the hairline (and the beard) is rounded for shape.

In this example, the barber has trimmed the hairline straight in front and softly blended the sides. This creates a neat look that is not too sharp.

# 7 Vintage With Shape Up

In this look, we see a vintage dapper style comb over combined with a step shape shaved alongside the temples. These sharp sides feed into a bald fade.

This model has combined a straight cut along the temples with a rounded beard outline. The hairstyle features a hard parting as well as an edgy brushed up do.

In this style, the hairline has been squared off along the forehead and the hair is separated by a high hard parting. The one side is brushed up and the other side features a razor fade.

In this trendy look, the model is wearing long upper hair which he has pulled into a man pony, with razor fade sides and a sharp line up over the temples.

Here the squared off hairline in front provides contrast to the brushed up quiff and draws the eye into the high, cantered parting.

In this look, the natural curls gently fall over the straightened hairline while the temples feature a softer S-shaped design. These lines and the razor fade are perfect for controlling curly hairstyles.

This model is wearing sharply shaped sideburns and the stylist has also given the base of his haircut a squared off shape.

This line up is impressive because not only has the barber created a unique shape over the temples and sideburns, but it’s been combined with a precision razor fade as well.

In this pompadour-inspired cut, the hair has been scissor snipped to give it an edgy texture and the barber has neatened the sides with a shape up.

For this look, the stylist has combined an angular line up over the temples with rounded lines on the stubble beard.

The sides have been trimmed short with the clippers while the curly top locks have been left longer; providing volume for this look. Over the temples, the barber has added a curved line up to finish the look off.

Here the high, hard parting draws attention to the squared off edges of the hairline which also tie in with the precision lines of the beard. The hairstyle features a comb over and a razor fade.

This flat top hairstyle is complimented well with a straight trimmed hairline in front and angular lines on over the temples. A short hard parting in front helps gives this flat top style balance. 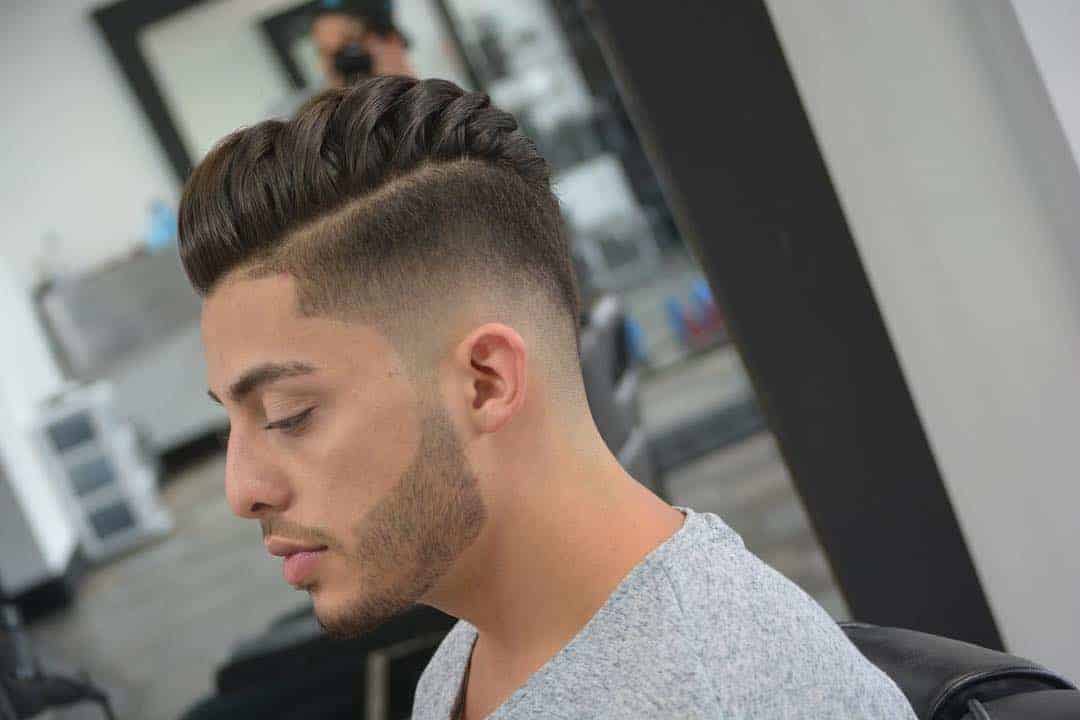 The rounded outline of the upper portion of the beard and sideburns draws the eyes up to the angular line up over the temples. The hairstyle features a razor fade and this stubble length is carried through to the beard.

In this look, the models longer wavy hair has been given a tousled texture and set with a product. To balance the voluminous look the barber has added squared off line ups on both temples.

A hard parting separates a comb-over and an impeccable razor fade and to add to the sharp look the stylist has included an angular line up at the temples.

In this style, the beard line flows in a curve up to the temples where it joins into a squared off shape up. The hairline has been cut straight in front and the hair has been trimmed into a razor fade at the back.

Styles such as these are perfect for covering thinning sections of hair. Here the hair was cut with a low fade on the sides and a smooth edge up over the temples.

In this look, the barber straightened out the hairline over the forehead and added a jagged line up over the temples, which has both rounded and straight edges.

Razor cut patterns are ultra trendy! Patterned linear lines created with varying lengths of hair are seen on the side and are complimented by a triangular line up.

In this fuller hairstyle, the razor cut line on the side draws attention to the straight cut line over the forehead and the shape up on the side.

Here the beard has been outlined with a curved edging which leads up into an angular shaping over the temples.

In this look an understated shape up helps balance this hairstyle that has volume in the upper locks and a stark razor trim separated by a high hard parting.

This angular line up draws attention to the small area of fade on the sides while the straight cut hairline in front gives definition.

In this look, there is a razor fade on the side which ends in a squared off line up over the temples. This helps to keep the style looking neat and put together.

Here the barber has combined a sharply squared off line up over the temples with an angular line over the beard, tying the two together perfectly.

This retro Afro look has been given a modern feel by straightening the hairline over the forehead and adding curved lines along the temples.

This hairstyle features a precision razor fade, hard parting, and comb over combined with an angular shape up that feeds into the sideburns and beard.

In this look the sharp edges of the line up on the side draw the eye down to the temples where the hairstyle and beard are connected by a neat stubble section.

As we have seen the shape up or edge up is a great compliment, especially for sharp looks and cuts with razor fades. It can help to balance voluminous looks and give balance to defined styles.

So the next time you are at your barber ask him to sharpen your look by giving adding a line up to your hairstyle – you’ll love the results!

55 Great And Neat Shape Up Haircuts - It's All About Angles